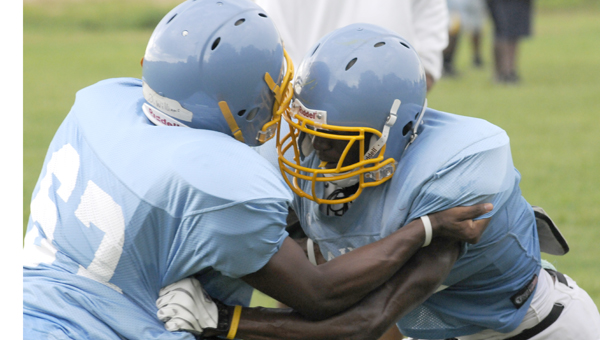 Selma High School defensive back Roderick Brewer, right, participates in drills during fall practices last season. Brewer, as well as Saints head football coach Leroy Miles, was selected to participate in the North-South All-Star Football game in Montgomery on July 12, and will leave for the capital on July 8. -- Robert Hudson

A pair of Selma High School Saints are preparing to gather with the state’s best in Montgomery.

Saints head football coach Leroy Miles and senior defensive back Roderick Brewer will report to Montgomery on Sunday at 1 p.m. for the North-South All-Star Football game as a part of the 16th annual Alabama All-Star Sports Week competition on July 9-13.

Miles, who will serve as an assistant coach for the South All-Stars, said he’s looking forward to the game, which will be played at Cramton Bowl on July 12 at 7 p.m.

“This is the first time for me and I’m very excited about the opportunity to coach this caliber game, to coach some great athletes that have signed to go on and play college football,” Miles said. “It’s an honor and a privilege to coach in this game.”

Miles said the game gives him a chance to work with some of the best coaches and players in the state of Alabama.

“Coach [Brian] Blackmon from Opelika is the offensive coordinator — a real good football coach — and we’ve had two meetings where we sat down and talked some offense. He’s a real smart guy,” Miles said. “I’m going to learn a lot from the coaches. Coach [Kerry] Stevenson [of Vigor], the head coach of the South has won a state championship, played for a state championship last year, so it’s an opportunity to be around some great coaches and there’s a lot to learn from them.”

Former Saints quarterback Darion Alexander was also selected to the South team along with Brewer and Miles, but will not play due to already being enrolled at Miles College in Birmingham.

Miles said with the selection of Brewer and Alexander — as well as past Selma players Reggie Glover and Ben Obomanu — should inspire current Saints players to work hard as they see what’s possible.

“It ought to inspire them to work hard. It’s an honor for a player to play in it,” Miles said. “Reggie Glover and Ben Obomanu have played in this game before. It says a lot about our program that we have some caliber guys that can go play at that level and to be selected to play. Hopefully this will motivate our kids, the seniors to come up, to work hard and to get this opportunity also because it brings a lot of exposure to you as an athlete, an individual and also to our football program here in Selma.”