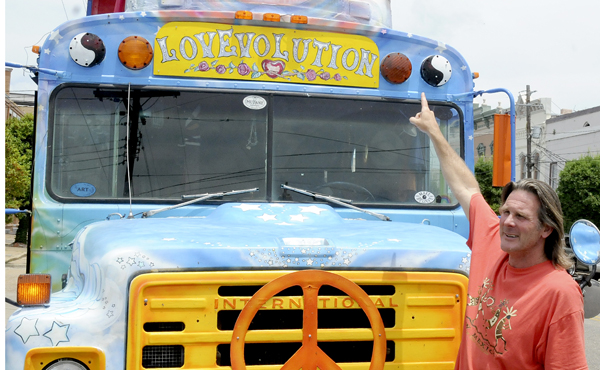 Scotty Miller, the Love Bus’ driver, has driven more than 4,000 miles to share the group’s visionary ideas. Miller, also known as Captain Moon Dog, said the team of LovEvolutionaries’ ultimate goal is to reach Chichen Itza for the end of the Mayan calendar in December.

A team of LovEvolutionaries, celebrating heart conscious evolution from the seats of the Magic Love Bus, drove through Selma Wednesday in their coast-to-coast journey to share free speech and visionary ideas.

The trip was something the San Francisco-based team of eight, which includes a 3-year-old, had been planning for years, Scotty Miller, the Love Bus’ driver, said.

“We had the intentions of doing a meaningful trip in 2012 where we could really reach out — talk, listen and document feelings — to those we encountered,” Miller, also known as Captain Moon Dog, said. “We also engage those around us with movies and music.”

Selma marked the 4,000-mile mark on a journey that has led the LovEvolutionaries through California, Arizona, New Mexico, Texas, Louisiana, Mississippi and Alabama. Their path will continue through Asheville, N.C. for Transformus 2012, an annual arts festival, and on to the northeast, where the group hopes to influence the impending elections.

“We recognize that humanity is at a point now where it needs to evolve past where it is,” Miller said. “Using love as our guiding principle, we want to walk the talk of being LovEvolutionaries. Even if we disagree on basic fundamentals, we must not demonize one another. We want to take that message to Washington and say, ‘Hey, you need to work together because you’re just not getting anything done for the people.’”

After spending time in the northeast, the group plans to travel to Chichen Itza, a pre-Columbian city build by the Mayan civilization, for the end of the Mayan calendar.

“We don’t believe it will be a cataclysmic event,” Miller said of the Dec. 21 date. “It’s just the start of a new era.”

Throughout their trek, filmmaker Patrick Hennessey, also known as Kernel Love Joy, will document the journey. Although it is no one’s intentions to make it big because of the movie, Miller said he hopes to see it on YouTube and Netflix one day.

“There’s going to be so much incredible footage,” Miller said. “We’ve experienced so much already. We spent time with a Native American tribe, we witnessed the annual Hippies versus Indians softball game, we celebrated Juneteenth in New Orleans, so much has happened.”

Peri Pfenninger, also known as Magic Love Fairie, spent a little more than nine years painting the Magic Love Bus. She said she didn’t have a favorite part of the bus, as she views the whole bus as one piece.

Pfenninger’s work is not yet complete, however, because she left the driver’s side of the bus fairly open so she could paint her reflections from the coast-coast journey onto the bus, formerly used in love parades around San Francisco.

“We’ve found an incredible amount of love for the bus,” she said. “The response has been great.”

Miller said the group was glad to be in Selma, and hoped they could start conversation about the Civil Rights Movement and the city’s history with residents during their one-day stay.

“I’m interested to see if the city is moving forward or still pretty divided,” he said. “Because if it’s divided, that’s what we’re here to do. We want to inspire conversation and move the nation forward. We are a platform for free speech, and we’re having so much fun doing it.”

For club owner Clyde Richardson, he has operated Club Entourage for 16 years. But, following a decision by the Selma... read more