Visitors to Selma are big business 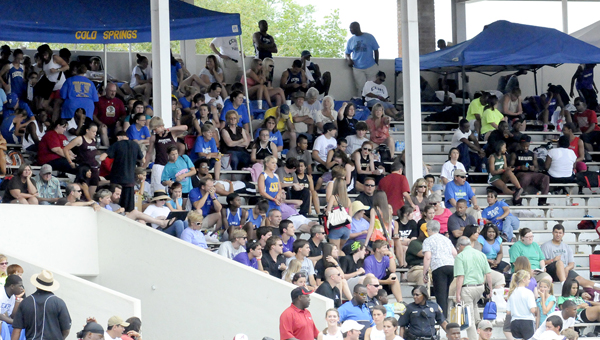 Spectators wait for a the beginning of a hurdles event during the Alabama High School Athletic ASsociation Class 1A-3A State Track Meet at Memorial Stadium this past May. The event brought thousands of visitos to Selma, providing a positive economic impact for local hotels and restaurants.

With the Alabama High School Athletic Association state track meet in early May, and now with a Cabela’s King Kat Tournament coming to town on June 23, the city of Selma is making a habit of hosting big events, and it’s hoping to keep it that way.

After meeting with local business owners recently, city officials are continuing to look at ways it can host big events, and after hosting the AHSAA Class 1A-3A state track and field meet at Memorial Stadium during the first weekend of May, it seems to have found another mainstay.

Elton Reece, director of the Selma Parks and Recreation Department, said the city hosted the event for the first time since 1991 after having hosted it since 1972, and despite a lot of work, it turned out to be a positive for the community.

“That was a lot of work, it’s changed so much because the Alabama High School Athletic Association has 192 schools in each three classification … and out of 192, we had 155 in Selma for that weekend,” Reece said. “We host it, they come, you have to work out the kinks the first year, and we actually were graded by the Alabama High School Athletic Association.”

The AHSAA came back to Selma after talking to coaches that participated for feedback and then had a meeting with city officials.

Reece said the AHSAA gave Selma around a B-plus grade, which turned out to be a higher rating than Gulf Shores, which hosted the Class 4A-6A meet this year.

The influx of thousands to Selma during the track meet turned out to be big for local businesses, and the city recently held a meeting in order to make sure those businesses are better prepared for future events.

“Some of the motels overbooked … some of the eating establishments even ran out of food,” Reece said. “So, the chamber of commerce and the mayor’s office, we met last week with the restaurant owners and the motel owners to let them know and give them an update of what things are coming up in the next year, so they will be prepared for that.”

Sheryl Smedley, executive director of the Selma-Dallas County Chamber of Commerce, said events like the track meet and the upcoming Cabela’s tournament are good for the community and the local economy.

“The impact of bringing these events to our community is for the benefit of the commerce that we have in our community because this money does not go to the hands of the city, or the county, or the chamber of commerce,” Smedley said. “It’s going to the business owners. That’s what we’re all about, promoting business and commerce in our community. The city and county only get a portion of the tax, the rest of it has all been to the benefit of the business owners and the local economy. All the hotels were booked, all the restaurants were full.”

Smedley said the meets are scheduled to be in Selma for at least the next two years, while Reece said the event had the added benefit of helping out local schools.

“It had like three-quarters of a million dollar impact on the city of Selma and Dallas County that weekend,” Reece said. “The mayor was happy, I was happy, and they (AHSAA) were extremely happy. We turned in to them $27,600. They get the gate, and we get the residuals off of that. The concession stands, we gave that to Selma High School. They were able to make that money for them, and the parking went to Selma High and Concordia ROTC programs.

“Not only did it help the citizens, and the businesses, and the eating establishments, it helped some of the local schools to raise money.”

Church brings in dozens of guns