Bears head to camp to fine-tune the Wing-T 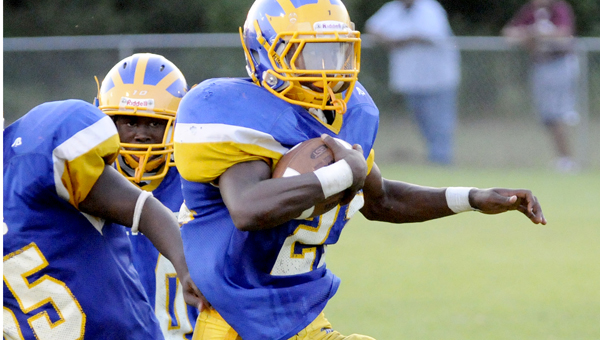 Charles Johnson (21) looks for some room to run during the Bears jamboree against St. Jude this spring. -- Robert Hudson

ORRVILLE — When watching the Keith High School Bears on the football field, one of the main things that stands out is their Wing-T offense.

It’s an offense that takes tons of practice to execute efficiently, and an offense where there’s no such thing as too much practice.

That’s one reason why Bears head football coach Harry Crum has taken some of his players to the Southeastern Wing-T Camp at the University of West Georgia in Carrollton, Ga. from June 14-17.

“We brought 10 kids over here, we brought some veterans who’ve been here before like Damarquis Lumpkin and Terrell Valzquez,” Crum said. “We brought eight new kids and we’re kind of cross training them and letting them work at different positions. You just never know what can happen. Martavius Harris — our running back and linebacker — this time we’re training him as a quarterback. You can’t have too many quarterbacks.”

Crum said he had hoped to take more players to the camp, but any experience he can get them is good experience.

He added that players also have gotten experience on defending the Wing-T alongside learning to run it.

“Sometimes, they have 7-on-7 drills, so they get to play linebacker and in the secondary, so it helps them with coverages and knowing how to play zone or man to man depending on what the offense is doing,” Crum said. “It gives them a different perspective when looking at it and seeing the Wing-T from the opposite side of the ball.”

Crum said one of the best things about the camp is that it gives players a ton of repetitions within the offense and individual drills, which engrains the motions of the Wing-T into them.

“One of the things that this camp does, because it’s specifically Wing-T, is it gives them 1,500 to 2,000 reps through drills and individual work in three-and-a-half days,” Crum said. “I couldn’t give them that many reps really in almost an entire season. It’s so intense that what it does with the high repetitions is it kind of forces you to remember the plays where it becomes second nature to you.”

The Bears will continue summer offseason workouts on Monday, June 18 when they return from the camp.