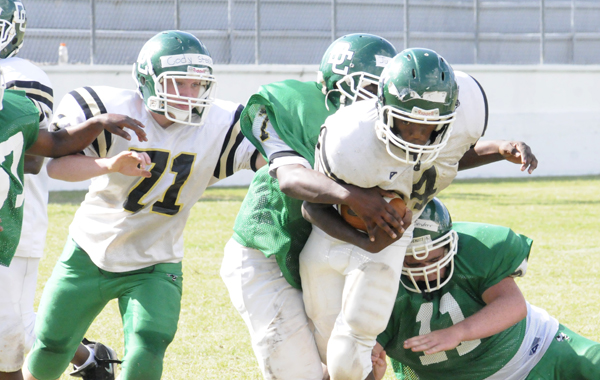 Dallas County’s Xavier Knight (4) tries to fight for extra yardage during spring practices. The Hornets will be led by their third head coach in three years after offensive coordinator Chris Littleton was chosen to take over the program. -- Robert Hudson

The Dallas County High School Hornets football team has found its new head coach, with an added bonus of familiarity.

Chris Littleton, who served as interim head football coach in spring practices, had that interim tag removed at the June 11 Dallas County School Board meeting, and will assume control of the program moving forward.

Last season marked Littleton’s second year back with the program after he had been away from it earlier, as he served as the Hornets offensive coordinator in 2011.

He said he’s ready for the opportunity to lead Dallas County, and he’s thankful that the school board is giving him the chance.

“We’re excited about it. It’s a great opportunity,” Littleton said. “I’m grateful to the administration and the board for giving me this opportunity to try and take the program in an upward direction. I feel like we have an opportunity to build on the work we did in the spring and we’re just ready to move forward.”

Littleton said the coaching staff is aiming not only to improve the team on the gridiron, but off it as well.

“It’s our goal to bring improvement to the kids on and off the field. We want these kids to leave our program as better young men than they were when they arrived,” Littleton said. “We feel like it’s not just our job to coach them on the field, but also to prepare them for what comes after football. It’s our job to help them with academics and also with the rest of their life.”

Littleton was able to get started on installing a new offense during this spring, and he said that time as interim head coach has helped the Hornets not miss a beat.

Littleton is also hoping his time at Dallas County as an assistant will help him lead.

“Me having worked at Dallas County before and then having been gone a couple years before coming back, there’s a familiarity with the community and with the school and with the kids that are there,” Littleton said. “That also, I think, can’t be anything but a positive.”