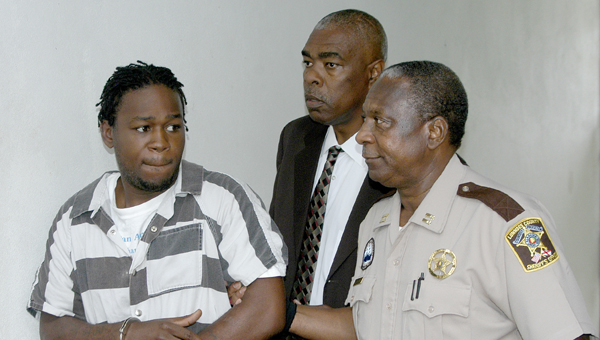 Thornton, who called the $3 million bond “outrageously high,” said he would address that at a bond hearing at a later time.

Lee is accused of killing three people in Lowndes County, including 9-year-old twins, Jordan and Taylor Dejerinett and their 73-year-old caretaker, Jack Mac Girdner. The three had been reported missing Monday and their bodies were discovered Tuesday.

Lee was later declared a suspect in the murders and captured Saturday morning in Selma after a four-day manhunt.

Johnson said there is a motion to revoke a pending $10,000 bond in Lowndes County on which Lee was out of jail on a robbery third degree charge. He said the hearing for that will be held June 19.

Lee was read the three murder charges filed against him by Johnson, who said he did not expect a preliminary hearing for Lee to be set before July. He said if Lee is later indicted by a grand jury, the charge could be upped to capital murder.

“He’s not guilty until the state proves him guilty beyond a reasonable doubt,” Thornton said following the court appearance.

Mary Ann Bracy Ford said she and her sister live off Alabama Highway 21 near where the bodies of the three victims were discovered.

“We were very concerned. We got a phone call that bodies may have been found near where we live …,” Ford said. “Justice needs to be served. This young man needs to pay for what he did.”

One arrested for hindering prosecution, manhunt

A Selma man remains in custody after agents with the Alabama Bureau of Investigation arrested him and charged him with... read more