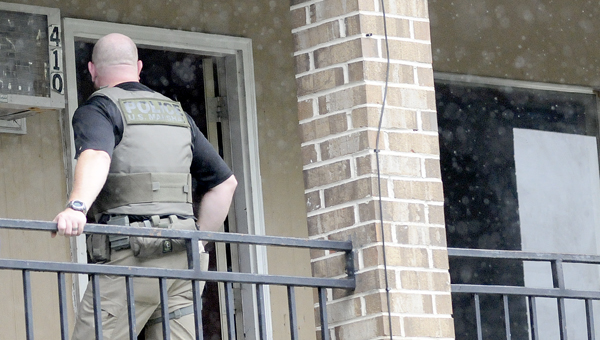 The horrific murders of three people — two of which were children — may not have taken place in Selma, but the city served as ground zero for the search of wanted murder suspect Deandra Marquis Lee.

That search came to a thankful calm end Saturday as an Alabama State Trooper tactical team stormed Merrimac Apartment’s 410 and discovered Lee, and an unidentified woman, inside. Both were taken into custody without incident.

“It was a great day,” Riley said. “I know it was raining, but none of us got hurt, the suspect wasn’t hurt, no civilians were hurt. I think we can all [breath a sigh of relief].”

Riley said he received a tip that Lee, wanted in the killing of 9-year-old twins, Jordan and Taylor Dejerinett and their 73-year-old caretaker, Jack Mac Girdner, was in an apartment at Merrimac Apartments, located on Medical Center Parkway. The tip, Riley said, came in at 10:30 a.m.

After interviewing the individual who gave the tip, Riley then coordinated information with the U.S. Marshals and members of the Alabama Bureau of Investigation. The three organizations immediately rushed to capture Lee.

According to a release from the Alabama Department of Public Safety, officers converged on the scene and evacuated residents in the neighboring rooms. Authorities then attempted to communicate with Lee and the woman without success.

It was then they entered the room and took the two into custody. Lee was immediately transported to ABI headquarters in Montgomery and charged with three counts of murder.

From the time the tip was received to the time Lee was in custody and headed to Montgomery was less than 45 minutes.

Riley said he was unsure why Lee, who had once lived in Selma but most recently lived in Mobile, didn’t flee Selma, but acknowledged he could have been preparing to mobilize when law enforcement officials captured him Saturday.

“Well it’s hard to tell,” Riley said. “You don’t know what’s going through these people’s minds. You’ve got to ask the question too, ‘Why would someone harm a child?’ He could have been trying to prepare to leave or get his resources together to leave; we just don’t know.”

“Law enforcement officers and the public did a great job in combining forces to capture this coward,” Jackson said. “[Lee’s] troubles are just now beginning.”

While packing up their equipment, Riley said he was most relieved that Lee was taken into custody without incident or injury.

Col. Hugh B. McCall, the director of the Alabama Department of Public Safety, said this arrest sends a clear and strong message.

“Alabama — both law enforcement agencies and the public — will not tolerate such heinous crimes in our society,” McCall said. “We will pursue tirelessly until capture.”

Residents rattled as murder suspect remains on the loose

The longer murder suspect Deandra Marquis Lee remains at large, the longer the residents of Selma and Dallas County will... read more