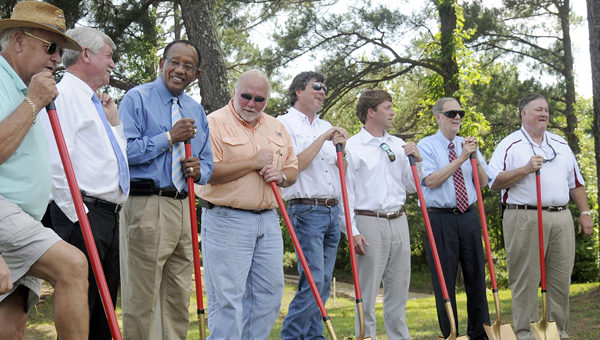 Members of the Selma City Council joined other city leaders and project coordinators to break ground on the new City Marina, scheduled to be built and open by Labor Day. -- Taylor Holland

The long discussion of when the new city marina will open has come to an end.

The city of Selma finally broke ground on the marina site Tuesday, and builders expect the marina to be up and running by September.

The members of the city council along with the marina’s contractors, Gordon McLendon and David Pearce, plan to have it open by Labor Day.

McLendon said the marina is projected to accommodate as many as 100 people with its outdoor decking. McLendon also announced at the ceremony that the facility would be non-smoking because it is on city property.

“I know a lot of people don’t like that [non-smoking] but let’s make that announcement from day one,” McLendon said.

Another key feature is a new gas pump at the marina that will allow boaters to fill up using a credit card instead of having to pay inside.

The new marina is partly funded by a city bond issue from October 2009.

Voters approved the bond measure that will ultimately allocate a total of $95,000 to the project.

Councilmember Cecil Williamson said the marina will be a great asset to the city, its boating community and tourism.

“It will function as a place for boaters to eat, fellowship, get gas and have an enjoyable time on the river,” Williamson said. “The city will profit from sales taxes of gas and food sold. This is a great recreational opportunity for Selma.”

Elton Reece, director of Selma’s Park and Recreation department said that he wants everyone to feel welcome at the new city marina.

“In the past, people thought the marina only served a certain sect of people but I want everyone to be out here and enjoy it, get something to eat and watch the boats come in and out,” Reece said.

At the ceremony, several attendees noted they have many fond memories of the marina for burgers and fun. Judy Twilley, a member of the Selma Boating Club, said that she and other members of the boating club utilized the club often.

“I’m excited beyond belief,” Twilley said. “It’s fun to call up the marina and say we’re coming in and we want six hamburgers and we will be there in 20 minutes.”

AAA projects 34.8 million Americans will travel 50 miles or more from home during the Memorial Day holiday weekend, an... read more