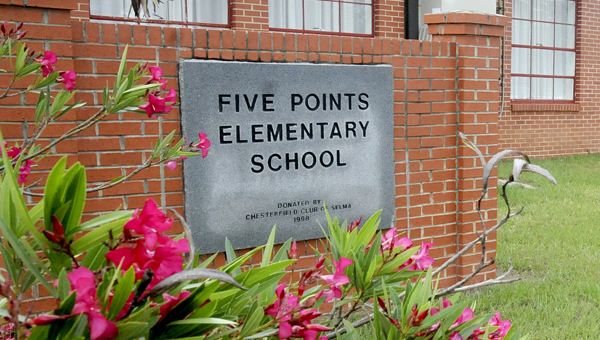 The Dallas County School Board voted unanimously Monday to close Five Points Elementary at the end of the current school year. -- File Photo

Lou Ella Guthridge has been an educator for quite a long time and has been principal of Five Points Elementary School in Orrville for the past six years. That job as principal, and the school itself, will all come to close when the final day of classes is held May 31.

The Dallas County School Board voted unanimously to support the recommendation made by superintendent of education Dr. Fannie Major-McKenzie to close Five Points Elementary, moving students in grades three through five to Salem Elementary and those students in sixth grade to Keith Middle.

Guthridge said she learned of the possible closure on May 2, saying she was “shocked at the news.” But, for McKenzie, the ongoing loss of students in the western zone, which includes Salem Elementary, Keith Middle and High School and Five Points, made the decision a necessity.

“We’ve been watching the population of the schools for well over a year. And, before I became superintendent, the system contemplated closing some schools. And, when we looked at numbers — they dropped again this year — and so the issue was staring at us right in the face,” McKenzie said. “The State Department of Education has been telling us to look at the numbers, look at the school populations.”

For board member Roy Edwards, who represents the Orrville area, the loss of students can be directly tied to the loss of opportunities for residents and graduates in that area.

“I would much rather be in a position to build schools instead of closing schools, but this is the right decision. There is no opportunity for employment in that area so you have kids go to school, graduate and then move away,” Edwards said. “We are seeing 10 to 15 students leave each and every year, because of the employment situation.”

Edwards said the projected savings for the move is $275,000 per year, mostly tied to personnel and operational costs.

“This isn’t about cost cutting,” Edwards said. “This is about making sure our system does not move to the negative side of the ledger.”

Any details surrounding current Five Points Elementary staff and faculty will be made known in the coming days and weeks, McKenzie said, noting that all of the decisions involving personnel have not been completed.

As for school equipment and supplies, equipment currently at Five Points needed by either Salem or Keith to accommodate the new students will be moved to the two schools a matter of weeks after the school year ends, while any other equipment or materials left over will be disbursed at other county schools as needed.

For Guthridge, the next few weeks of school and the final work days for faculty and administration will be difficult, but she understands the move is necessary.

“I am sure there will be other school closures in Dallas County at some point, it just so happens that Five Points is the first one,” Guthridge said. “I am saddened by that, but the board and Dr. McKenzie have to do what they have to do.

“Change comes hard, but we have to accept it. So I accept it.”

A portion of a brick wall in front of the Old Depot Museum on Martin Luther King Street, was completely... read more