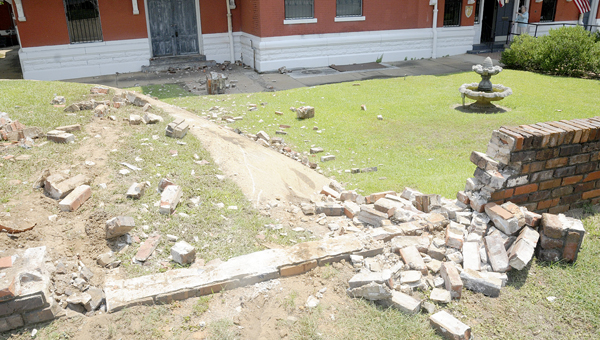 A portion of a brick wall in front of the Old Depot Museum on Martin Luther King Street, was completely destroyed early Sunday morning when an Oldsmobile Eighty-Eight crashed through the wall. The driver of the car claims his brakes failed as he headed east on Water Avenue. -- Ashley Johnson

On Monday morning Old Depot Museum director, Jean Martin, drove up to the museum to find a portion of the museum’s brick-walled fence in ruins.

“Oh I’m furious,” Martin said. “No one called to tell me what happened.”

Martin, after discovering the damage herself Monday, was later notified by the Selma Police Department that a vehicle crashed into the fence at 5:15 a.m. Sunday. The impact shattered a portion of the antique brick wall, sending a shower of bricks into the museum’s front yards. The vehicle came just feet away from two stone monuments.

According to Selma Chief of Police William T. Riley, officers responded to the call where they found a 1996 Oldsmobile Eight-Eight had crashed through the wall and came to rest a few yards away from the museum’s front door. The driver, Leon Fitts, told police that his brakes failed as he drove east on Water Avenue, Riley said.

Monday police did not have evidence the driver was under the influence. Officials did, however, issue the driver, Fitts, multiple citations in connection with the accident. Riley said Fitts was not able to provide proof of insurance or a drivers licnese.

“What a way to start a Monday,” Martin said. “People who come and enjoy the museum deserve the opportunity to see it at its best and with the recent break-ins and now this it seems like we are constantly trying to raise money to make repairs.”

Several weeks ago the Old Depot Museum was broken into and the central heating and cooling unit was stolen. Martin said she sees Monday’s accident as another set back from the museum’s main goal and purpose, “to preserve the history of this wonderful Black Belt region.”