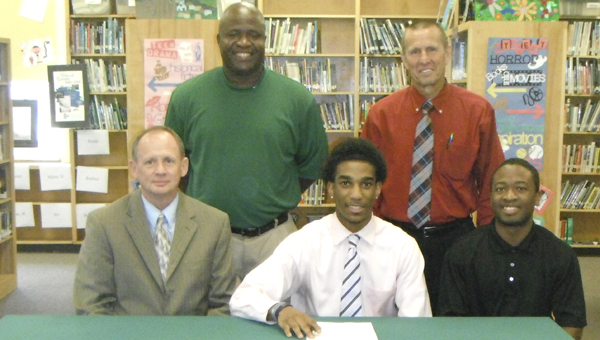 After leading the Hornets to a strong season on the court, Dallas County High School senior point guard Jibrail Hayes will take his talents to the next level.

Hayes, who helped lead the Hornets to a 24-5 finish this past season, will continue his playing career at the collegiate level starting this fall after signing a scholarship with Marion Military Institute on Monday.

Hayes said it’s a good feeling and a major accomplishment to move on to college, and he’ll look to improve his game and maintain focus academically.

“I feel like I can improve on my whole, overall game and become a better player in every way possible,” Hayes said. “Also, my studies, I have to make sure I stay on top of that and balance those. I think it’s very, very important and that’s one of the reasons I chose MMI because they have a very good educational background. I feel like I can go there and get everything I need academically and playing on the court.”

Hayes was the senior leader of a Hornets team that played eight underclassmen this past season.

Hayes helped lead Dallas County to the Central Regional Tournament in Montgomery during a season that included a Class 4A Area 6 championship and a No. 7 ranking in the final Alabama Sports Writers Association Class 4A state poll.

“Jibrail was a very unselfish player and I think that’s what made him what he was as a player,” Moore said. “He sacrificed a lot of opportunities to score in order to get other kids involved, so we feel like this is going to help him transition to the college level being able to effectively run a team. He’s very prepared for that.”

Moore also said Hayes showed a lot of determination over the course of his career, and he carried the Hornets in his final season.

“It was kind of a unique situation. Jibrail was a three-year starter and tore his knee up his junior year, and he was one of the very few players we had coming back and had to play with a young group of guys,” Moore said, “so early on in the year he had to carry us in a whole lot of ways as far as offensively and defensively. The experience factor and leadership he brought to our program was key this year.”

Hayes said it’s going to take everything he’s got in order to make a successful transition to the college level.

“(It’s going to take) Constant hours in the gym, dedication and not letting anything knock me off track,” Hayes said. “Giving everything I have to basketball and my studies, and just going all out.”