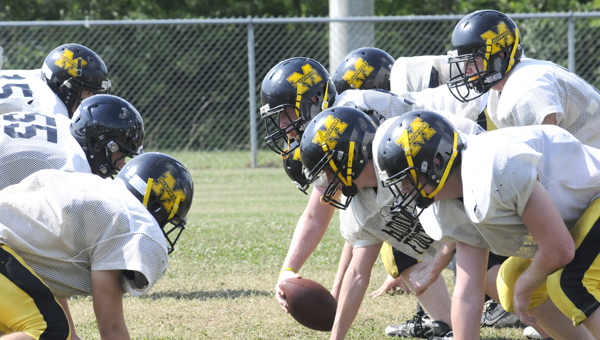 The Meadowview Christian School Trojans scrimmage during a practice earlier this month. Trojans coach Lebo Jones said the defense was impressive during the spring scrimmage at South Montgomery. -- Robert Hudson

A pair of local schools wrapped up spring football practices with controlled scrimmages.

The Morgan Academy Senators and Meadowview Christian School Trojans both participated in controlled scrimmages on Friday, May 11.

While not necessarily a game situation, controlled scrimmages give teams a chance to run plays against other teams with a goal of improving.

The Senators traveled to Wilcox Academy to scrimmage Wilcox and Fort Dale academies.

Bob Taylor, head football coach at Morgan Academy said the scrimmage gave the Senators a chance to see what they’ve learned during the spring.

“We probably got in a little over 140 plays with all of our groups — with our first group, second group and some of our third group between offense and defense,” Taylor said. “It was good. We got a chance to see kids perform and see what we were working on and see how things went. It was strictly about just practicing and doing what we had to do.”

While Taylor said he was pleased with how the team did overall, he added there’s still work left to be done.

“Offensively, I was pretty pleased with our base stuff we put in. I think our passing game was probably better than what it was last year,” Taylor said. “We did a good job at times on offense, and at times we didn’t look really good with it, but that’s spring. Defensively, we were kind of mismatched in a couple of spots, we’ve got a lot to do there and we’ve just got a lot to do with everything overall. I was pleased with what we got accomplished in the spring, but we’ve still got a lot of work ahead of us.”

The Trojans participated in a controlled scrimmage at South Montgomery County Academy.

“It lets the guys play against other people besides their own team in practice,” Jones said. “Also, just being together as a team as we travel down, it gets everybody ready for football again.

Jones said he was impressed with his defense, and the Trojans will look to improve in the trenches moving forward.”

“We played real good defensively, I thought,” Jones said. “I thought our overall team speed was good. We got to the corner real well on defense and we didn’t let them get outside on us too much. We can always improve on our offensive line and defensive line play. We’re going to need to improve on that and we’re going to work hard to get our line better in the off season.”