Keith to play host to Selma, St. Jude in jamboree 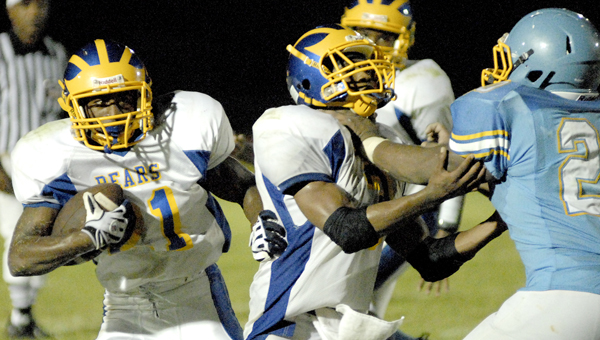 During a fall jamboree between the two teams last August, Keith running back Charles Johnson (21) looks up field against the Selma Saint defense. The two teams will be part of a 3-team jamboree Friday evening in Orrville hosted by Keith. The third team joining in will be St. Jude from Montgomery. -- File Photo

Two local schools are preparing to clash on the gridiron Friday, aiming to have fun and gain crucial experience in the process.

The Keith Bears will host the Selma Saints in a football jamboree game that will also include St. Jude Educational Institute of Montgomery Friday in Orrville starting at 6 p.m.

Harry Crum, head football coach of Keith High School, said anytime the Bears and Saints get together it’s bound to be a good time, and this time will offer a first for both teams.

“Anytime we play Selma High – I don’t care if we play them in marbles or dominoes – our kids are going to get up,” Crum said. “If it happens to be football, they really get excited. I know Selma High is going to bring a lot of people down here. They’ve never come down here and played us in football, so that’s going to be something new, but it’ll be something that is new to our kids, especially our kids that our going into their senior year. I think they’re really going to get a kick out of it.”

Saints head football coach Leroy Miles said the game is an exciting opportunity for Selma’s young players, and it gives them a chance to play Keith again after both teams met in a fall jamboree before the 2011 season.

Both coaches said the game gives them a chance to get experience for their younger players, and a chance to work on the little things.

“We’re going to work on trying to tackle well and trying to carry out our individual assignments,” Miles said. “Sometimes kids have the tendency to want to make all plays on defense. And it’s just important that you do your assignment on defense, so we’re going to kind of be evaluating that to see how disciplined different kids are in terms of their position and what they play and what they’re supposed to be doing. I think that’s going to be key for us.”

Crum said his team is going to work on controlling the football and polishing its run-first offense, while also working on the pass.

“I think we need to get crisper … taking care of the football,” Crum said. “There was a time when we rarely fumbled. There are little nuances, little things like carrying the ball. We want to work on some passing things. We’re not traditionally a passing team, but we use the run to set up play action, so I want to look at Maurice [Crumpton, starting quarterback for Keith] and get a closer look at him. Maurice seems like he’s been around forever, but he’s only in the tenth grade. Primarily, we’re just trying to get sharper.”