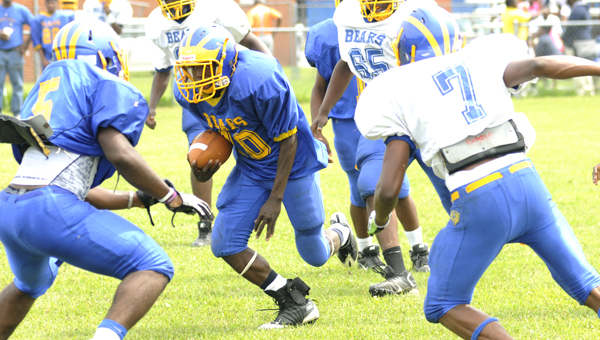 Keith High School’s Delmuss Irby, center, splits the defense during the Bears’ intrasquad spring scrimmage on Friday in Orrville. Keith is preparing for the 2012 season as well as its jamboree game against Selma High School and St. Jude on May 18 in Orrville. -- Robert Hudson

For the Keith High School Bears football team, the spring is not only a time to prepare for the upcoming season, but it’s a chance to get back to the basics.

The Bears continued to work toward the fall with an intrasquad scrimmage on Friday.

Harry Crum, head football coach of Keith High School, said the Bears have been working on the fundamentals this spring, as well as getting some experience for their younger players.

“We’ve just been working on the basic fundamentals, going back and going to the drawing board with blocking, and really working on tackling,” Crum said. “We have some young guys I want to get a look at on offense and defense.”

Crum said the Bears will rely heavily on a number of rising seniors this season, but he’s still trying to prepare younger players for this year and beyond.

“I realize we’re going to be senior heavy this year, which is a blessing, but by the same token, they’re going to be gone a year from now,” Crum said. “So I’m trying to get some guys some repetitions so that they’ll be ready to step in and fill those shoes in 2013. Right now, 2012, we have a lot of experience. We lost four guys that can really play in Eric Tolbert, Larry Molette on the offensive line who was our MVP, and Isaac Boglin and Bobby Barnes. We’re going to miss them, but we’ve got to go on.”

Crum added that it’s exciting just to get back on the field, and that excitement level as paid off for the Bears in terms of the number of players who’ve suited up this spring.

“I love it. I love the smell of cut grass, love everything about the game of football,” Crum said. “The kids are really excited about getting back out here. I thought we’d have 40 (players) dress, but we ended up with about 31, which is a good number for spring and, in fact, the most I’ve ever had out here for spring.”

Overall, Crum said he’s trying to get the players to understand just how important spring practices are, because hard work in the spring could push the Bears over the top and help them build on last season’s 8-3 finish.

“I think it’s very important and I think at most schools they treat it as if it’s important,” Crum said. “We don’t really have that tradition really ingrained in us and some think they can just come out in the fall. Well, then you’ve lost some steps by not coming out with everybody else. I just really want to get it ingrained in our kids that spring is important. It gives you that extra edge, and when our kids finally understand that I think we’ll be going to another level.”