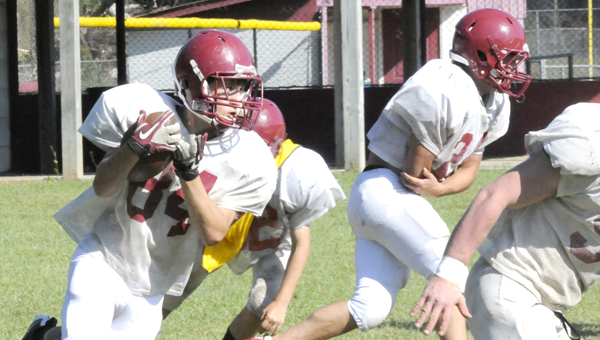 Morgan Academy’s John Robertson runs the ball during practices on Thursday. Below, Senators’ quarterback Dalton Lee rolls out and looks for an open man on Thursday. -- Robert Hudson

The Morgan Academy Senators football team has made a few adjustments as it wraps up spring practices.

The Senators will finish up their first spring under new head coach Bob Taylor with a controlled scrimmage at Wilcox Academy Friday at 3 p.m.

Taylor said the spring has been about polishing the offense and retooling aspects of the defense.

“We’re just trying to get our base stuff down with our offense and defense,” Taylor said. “We’re revamping our whole defense, so we’re having to re-teach anything different than we’ve done in the past here just to try and fit our personnel. Offensively, it’s just been about trying to get our six or seven base plays down and be able to run them effectively, and be able to add from there on.”

The Senators are getting used to a few new things as Taylor takes over for former head coach Brian King, whose staff Taylor served on at Morgan for the past few seasons.

Morgan has also welcomed a new assistant coach in Trey Pike to the staff, and Taylor said the players have responded well.

“I think it’s gone real well. The guys have responded real well to coach Pike and what he’s got going and I like what we’ve got going,” Taylor said. “They’re getting used to me doing a few things differently than coach King did. They’ve had a good spring. We’ve had our junior high out for two weeks working with us and we’ve just worked it down to varsity this week. Everybody’s been getting the same teaching from 7th through 12th grade where they all hear the same voices and hear the same thing all the way up.”

Taylor said spring practices are partially about finding out which players can play certain positions.

“We’re moving people around and trying to find spots for them to play and do things that they might not be used to doing, but we’re trying to see (what they can do),” Taylor said. “I think that’s what spring’s about, to give the kid a chance to play the position they want to play, and if they can’t play it and you feel like you need to put them somewhere else, then that’s where you put them.”

Taylor added that spring also serves as an opportunity to teach.

“It’s been a huge thing for us. We’ve actually got about five guys that have never played football out here and it’s been a chance to teach them how to do things, and we’ve got a couple of them that have kind of surprised us, not necessarily with their abilities, but their concept of what we’re trying to do because they’re quick learners,” Taylor said. “They’ve done a good job picking it up and so have the rest of the guys as whole. I mean, we still have our days where it flies in one ear and out the other, but that’s just normal when you deal with teenagers.”

Taylor said it feels good to get back on the field after ending last season with a loss in the Alabama Independent School Association Class AAA semifinals against Glenwood, and he’s been pleased with how spring practices have gone overall.

“We had a bad taste in our mouth, I guess, left over from last year the way the season ended against Glenwood, but it was a great year,” Taylor said. “We’ve got a lot of holes to fill, but it’s been a good spring. The kids have done a lot, the work ethic’s been great, the workouts have gone well and they’ve responded well to what we’re trying to do. We’ve got a busy summer ahead of us with some 7-on-7s and camps going on.”