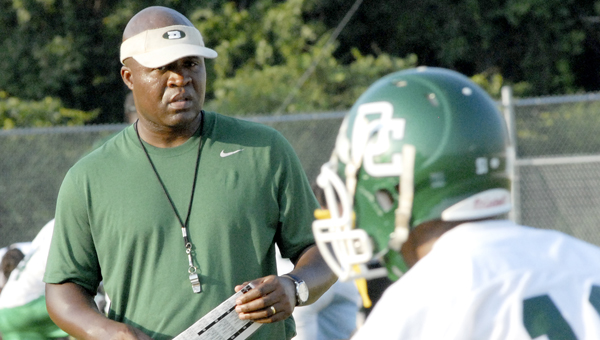 Dallas County head football coach Willie Moore keeps his tabs on drills during last summer’s workouts by the Hornets. Moore, who also coaches baseball and boy’s basketball, has decided he will only coach boy’s basketball next season. -- File Photo

Dallas County High School will have to begin the search for new head baseball and football coaches as Willie Moore has resigned from both positions.

In a letter to the Dallas County School board, Moore requested permission, and was allowed, to resign his positions as Dallas County’s head baseball and football coach.

Moore said the decision to step down was a personal one.

“I’ll have a little more time to do some of the things I’ve been wanting to do for quite some time. I like to hunt and fish, so I’ll be able to do little more of that than I’ve done in the past,” Moore said. “It’s tough because I’m a hard worker and all, but when it came down to it, I just felt like it would be in the best interest of me and my family at this time for me to concentrate on just a few things and instead of trying to do everything.”

Moore’s resignation as head football coach after one season means the Hornets will have to enter the 2012 season with their third head coach in three years.

The Hornets’ football team went winless in the 2011 season, while Moore led the baseball and boys basketball teams to area titles.

Moore won’t rule out coaching spring sports in the future, but he said basketball is his main focus.

“I’m not saying that I won’t coach a spring sport, just right now I’m just trying to focus on one thing, and I’ve done basketball the longest, so it was just quite natural to do that,” Moore said.

The State Department of Education and the Alabama Legislature provide school systems money for principals, counselors, assistant principals, librarians, teachers, and by extension, coaches based on population.

Due to it being unlikely there will be an open teaching spot or the funds to add another teacher, the school board is more likely to hire from within to fill both positions.

“As a result of not having the funds to hire another teacher, we have to stick with what the foundation provides for us, so that will limit our ability to recruit new people,” said Dallas County Schools Superintendent Fannie McKenzie at a recent school board meeting. “We have to stick within what the state provides because we don’t have local money to hire additional people.”

Moore said he hasn’t had any conversations with anyone concerning hires or anything of that nature.