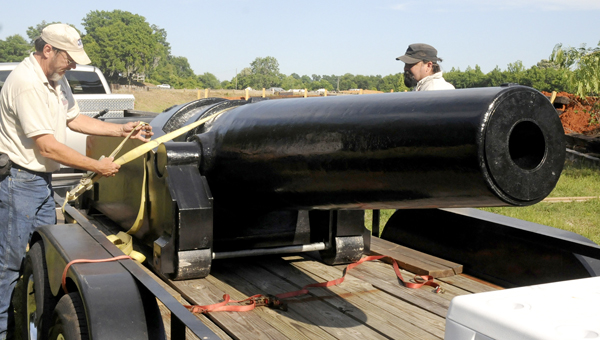 Jerry Franklin and Jeffrey Hall of the National Civil War Naval Museum in Port Columbus, Ga., untie a 7-inch brook rifle Wednesday to set up for the Battle of Selma that gets under way today with the annual school days. This is the first time the men will participate as re-enactors in Selma. -- Desiree Taylor

The Battle of Selma begins today and event organizers have spent much of the year organizing the four-day event that draws history enthusiasts of all ages.

James Hammonds, president of the April 1865 Society, said nearly 540 re-enactors of the 600 total participants of sutlers, members of the period band and logistics team, had already registered by Tuesday. Hammonds said participants are excited.

“It has picked up steam and more and more re-enactors are registering,” Hammonds said. “The weather plays into any outdoor event. It looks like it’s going to be a nice weekend.”

For volunteer Jeffrey Hall and Jerry Franklin, living history coordinator for the National Civil War Naval Museum in Port Columbus, Ga., this is their first time in Selma as battle re-enactors.

“We’re the only Confederate naval command participating in the Battle of Selma,” Franklin said, who will serve as commander. “We’re pretty excited.”

Hammonds said the public can look forward to a variety of activities throughout the scheduled venue. Free events begin on Friday and include a Civil War writer’s forum at 5 p.m. inside the Arts Revive Carneal Building, a cannon night firing at dusk and a camp dance with period music, inside the battlefield. Saturday and Sunday events will cost.

“For the camp dance you don’t have to dress up and buy a ticket,” Hammonds said. “Battlefield admission on Saturday and Sunday is $7. For the Battle of Selma Grand Military Ball (at Sturdivant Hall), the receiving line starts at 7 p.m. You have to buy a ticket if you’re not a re-enactor.”

The history of the era, Hammonds said, is what makes others want to get involved and draws tourists to the annual event.

“It marks historically a turning point, a closure in the Civil War, almost at the time of the fall of Richmond, which destroys hope of any last resistance,” Hammonds said. “(Selma) was the logistics and manufacturing center; it’s well known within amateur historians.”

Hammonds said the Battle of Selma offers something for everyone.

“We just hope everyone comes out and sees the battle, it looks like it’s going to be nice weather,” Hammonds said. “It ought to be fun for the whole family.”

With the recent occurrences of gun violence in the area, one grassroots organization is concerned about the acts of aggression... read more