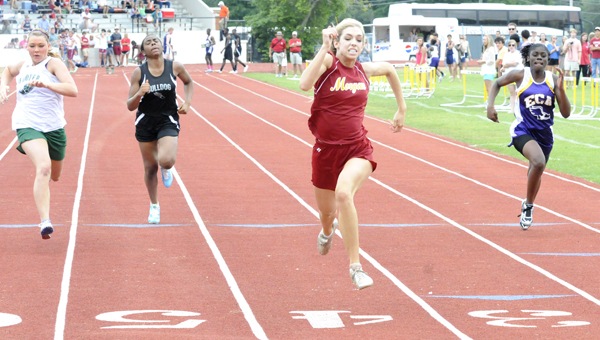 The Morgan Academy Lady Senators’ capturing of the girls overall AISA state track and field title was a team effort, but seniors Rachel Gomes and Sarah Frasier were integral in the team’s first state championship since 2001.

Gomes and Frasier ended their careers at Morgan Thursday at Memorial Stadium as they helped guide their team in overcoming Lee-Scott Academy — the team they had been runner-up to for years.

“It’s so exciting,” Frasier said. “We’ve (Frasier and Gomes) both been on the track team since we were in seventh grade and we’ve always come in second place to Lee-Scott, so it’s so great in our senior year to finally get state.”

Frasier was named the most valuable player for the girls division, as she racked up the most individual points in winning the 100, 200, and 400-meter dashes.

Gomes captured both the 100-meter and 300-meter hurdles with times of 17.02 and 48.16, bringing her career total to ten hurdles state championships, and also won the girls long jump title.

“It’s awesome. I feel like this is the one thing I’ve been given the gift to do and it’s nice to have a chance to have something for me that also helps the rest of the team,” Gomes said. “It’s been a long, hard year, especially since we had always been second to Lee-Scott, so being able to all do it individually, but yet have it as a team effort, feels great.”

Both girls were members of the 4 x 200-meter relay team, which included teammates Anna Kate Mock-Jordan and Mary Peyton Deer, that captured the state crown.

Frasier said the bond between the relay team’s members is one of the things that enabled the Lady Senators to capture the AISA overall state crown.

“We had the same relay team last year also, so we got to perfect our relay and get better this year, and we did get better,” Frasier said. “Our relay team is such a good team. We work well together.”

“We pep talk each other, we warm up together, we ride to the track together,” Gomes said. “There’s really a bond.”

Both Gomes and Frasier said credit goes to the team, all of Morgan’s supporters and especially coach Rob Robinson.

Frasier said Robinson is a great coach and he’s prepared the girls to bring even more titles to Morgan.

“Coach Rob has already started preparing the younger girls, and they have a lot of really good potential in distance (running) and I think that’s going to help them win championships in years to come,” Frasier said.

Morgan leads after day one