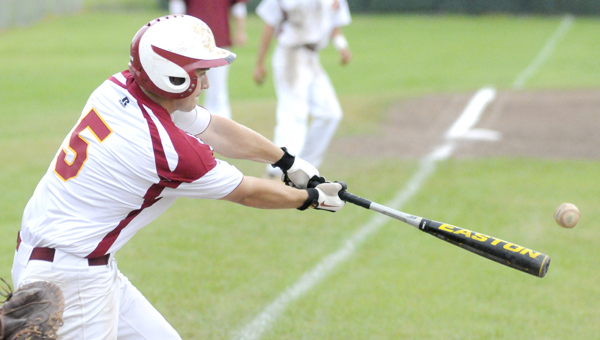 Morgan Academy’s Justin Seele makes contact with a pitch against Prattville Christian on Tuesday. Seele had 3 RBIs in the Senators’ 6-0 win over the Panthers at home Tuesday. -- Robert Hudson

A six-run inning in the bottom of the third proved to be the difference for the Morgan Academy Senators, as they defeated the Prattville Christian Academy Panthers 6-0 to claim the area title at home on Tuesday.

“It’s big, it’s not really sunk in yet, but I’m sure it will later,” Morgan head baseball coach Trey Pike said of the win that gave the Senators (14-4, 8-1) the Alabama Independent School Association Class AAA Region 2 Area 2 title in Pike’s first year as head coach.

The game was scoreless in the bottom of the third inning, when Morgan’s John Pomeroy scored from third base on a fielder’s choice.

That play gave Morgan its first run, but it was Justin Seele who sparked the Senators with a line drive to left field that allowed him to double and clear the bases, scoring teammates Parker Hughes, Cobb Bostick, and Joel Yarbrough to make the score 4-0 in the bottom of the third.

Morgan wasn’t done, as Kyle Friday drove in Seele from second base with a shot to the gap in right center field that netted him a double, making the score 5-0.

Morgan’s final run came in the same inning when Pomeroy singled with a line drive to left that brought in teammate Dalton Lee.

Pike said mixing up the pitching was key in defeating the Panthers.

“(We tried to) Throw the batters off with stuff they probably haven’t seen much, because they’re a good hitting team and your only chance against a good hitting team is to just try and mix it up the best you can with them,” Pike said. “My hat’s off to those guys because they’re a good team. We just played great, great ball today, and I’m proud of my guys.”

The Senators had a lot of success from the mound, as Pomeroy, who started the game and pitched six innings, struck out eight batters.

Yarbrough struck out two batters in the top of the seventh inning pitching in relief for Pomeroy.

The Senators will take the field again Saturday at 12 p.m. when they’ll travel to Tuscaloosa Academy in a game that will determine the region champion.

The winner of that matchup will also host a playoff.