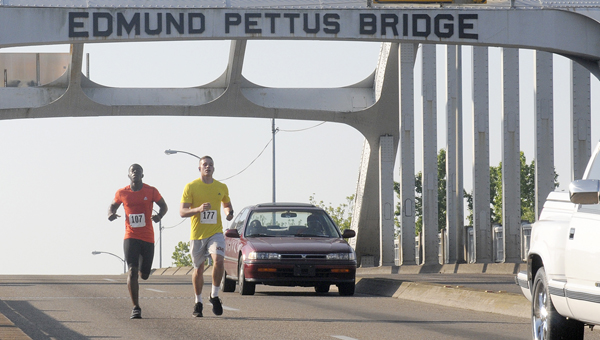 Jamal Green and Michael Schneider, both cadets at Marion Military Institute, cross over the Edmund Pettus Bridge Saturday during the Butterflies and Bridges Run. -- Tim Reeves

Runners at most 8K running events aren’t confronted with a man-made hill the size of the Edmund Pettus Bridge at the midway point of the course. But, most runs don’t offer the reward of reaching the peak of that obstacle, which is a stunning view of the Alabama River.

Those runners competing in the 8K portion of the 5th annual Butterflies and Bridges run were treated to such a view, and accompanying gorgeous weather as well, Saturday morning.

“The weather was fantastic this morning. We couldn’t have asked for anything better,” event organizer Bill Potter said. “We were pleased with the turnout and I think the runners were just as pleased with the course and the weather.”

The annual event, which features the 8K course and a 2-mile course, goes to benefit the athletic programs of schools in the Selma City School System. While this is the fifth year for the run, Potter said it was one of the toughest.

“The number of participants we had this year is about what we had last year,” Potter said, adding this year’s event drew 105 runners compared to last year’s total of 120 runners. “But, we had a hard time getting the number of sponsors on board. We will take a look at how we go about doing that before next year’s event.”

The run also had more than just a Selma flavor this year. The event drew runners from throughout Alabama, and even the country.

“We had a runner from Oklahoma, Michigan and Miami,” Potter said. “It was a great group.”

One group that did take part was one from Marion Military Institute. Led by math instructor Aaron Smith, the group of five from the Marion college completed the run and had a good time in the process.

“We were just showing the power of friendship and what it could accomplish,” MMI Cadet Captain Jamal Green said, referring to a point in the race when he, and fellow cadet and runner, Michael Schneider, gave each other a hug while still running and posing for a photograph. “We had a good time.”

Green, a Georgia native, was the highest ranking cadet of the group, which included Schneider, a Washington native, Kris Reid from Oklahoma, Carly Campbell from Colorado and Michigan native Jaime Davis.

Potter said that while exact figures of how much was raised wasn’t calculated, he knows the event did well.

“It was a good event. We are already looking at things we can do next year to make it even better,” Potter said.