Selma’s connection to the Master’s 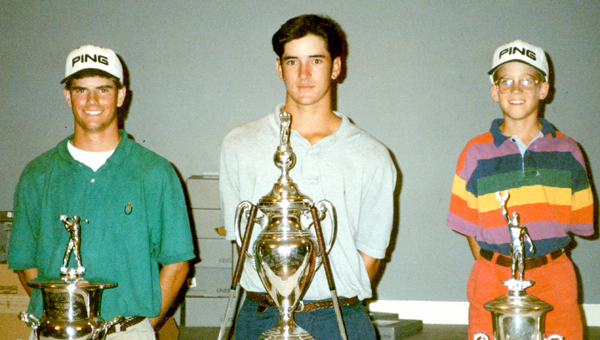 Bubba Watson, center, is pictured with Will Swift, left, and Andrew Medley, right, after winning the 1993 Dixie Junior Tournament at the Selma Country Club. Last weekend, Watson claimed the green jacket that comes with winning the 2012 Master's. -- Submitted

When Gerry “Bubba” Watson captured his first major championship by winning the Master’s, with an improbable hook shot from between the trees on the second playoff hole, the golfing world was awestruck as to how he pulled it off.

But for one former competitor, Bubba’s 40-yard, hooked gap wedge off the pine straw to an elevated 10th green was business as usual.

“He’s been hitting that shot since he was 8 years old,” said Will Swift, who grew up in Selma and played against Watson on the Dixie Junior tour before competing against him in the college ranks. “He was very different than any 7 or 8 year old you see today. He was always trying to hit a trick shot, something out of the ordinary. He’s been doing that all his life.”

Swift remembers Watson as a quirky, often misunderstood kid who played by his own rules and displayed a free spirit that most people couldn’t comprehend.

“He went through a stage of wearing a black toboggan on his head during the summer while he was playing the Dixie Junior,” Swift said of Watson, who won the Dixie Junior tour championship multiple times. Some people thought he was strange and didn’t know what to say to him. But that was just Bubba being different. I always took him for who he was.”

Bubba “being different” also included his choice of golfing attire. While most other kids played in shorts, he wore knickers, which caused more than a few heads to turn.

“His grandmother made them for him so he wore them,” said Swift, recalling a photo of him and Watson as kids standing near the first tee at Selma Country Club, Watson sporting his knickers and wearing a cap. “Kids didn’t wear knickers back then.”

Bubba’s father Gerry, who passed away 18 months ago from throat cancer, heavily influenced him, often criticizing Bubba, even when he won.

“His dad was an ex-Green Beret and was pretty tough on him,” Swift said. “I remember when he won a tournament and his dad would get on him because he didn’t play well, but I think that’s where a lot of his determination comes from.”

As Watson got older and refined his game, his reputation grew, and so did the fear of having to face him in a tournament. Beau Boyd, who is a few years younger than Watson, recalled playing against him in the early 90s.

“In junior golf he was ‘that guy’ who we were all scared of, who you always knew was going to win,” Boyd said. “We were not in the same league, he was that much better than us even as kids. He could hit a golf ball on the longest par 3 at Selma Country Club with a six iron and the rest of us were using woods. Everybody knew who Bubba Watson was. Everybody did.”

Swift, who won the Alabama State Amateur title in 2002, thinks Watson’s win at the Masters just might be the catalyst for the golfing world to begin to realize just who Bubba Watson is – and how good he is.

“The guy has got more shots than Tiger Woods every dreamed of,” Swift said. “But is he the quality of golfer Tiger is? Probably not, but he’s got those hands, creativity and guts to try those shots. It’s pretty cool for the game.”

John Mark McMillian From radio-friendly tunes made famous by such rock bands as MercyMe and Lifehouse, to more contemporary lyrics... read more