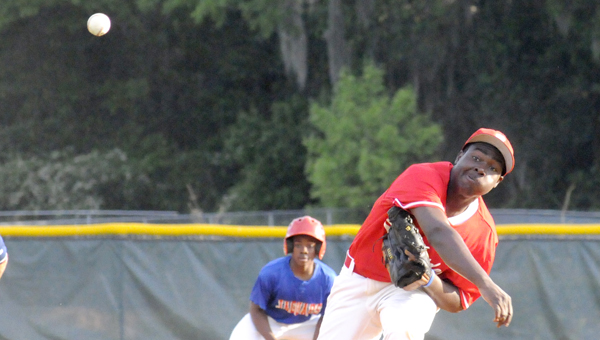 Southside pitcher Mikal Brown delivers a pitch against Wilcox-Central. The Panthers produced on offense and capitalized off the Jaguars’ mistakes en route to a victory. -- Robert Hudson

The Southside High School Panthers relied on their bats and capitalized off their opponents’ mistakes, as they defeated the Wilcox-Central Jaguars 22-13 Wednesday at Bloch Park.

John Solomon, head baseball coach of Southside (2-7), said his team came together and fought through adversity in getting the win.

“They played through all of the adversity they had today, and they did a good job,” Solomon said. “Pitching wise, we still had a little trouble — we had a lot more balls than strikes. Other than that, they got through it with teamwork and hard work.”

Wilcox jumped ahead 2-0 in the top of the first inning, but walked in Southside runners Jakobi Lawrence and Khamari Gibbs in the bottom of the first in a bases-loaded situation to tie the game at 2-2.

Southside took an early 3-2 lead in the same inning when Jamarques Murry drove in teammate James McNeil from third base on a fielder’s choice play.

Wilcox added a run in the top of the second to tie the game, but Southside responded in the bottom of the second when Jhalandius Sullivan advanced from third because of a balk by the Jaguars’ pitcher, giving the Panthers a 4-3 lead.

Southside capitalized off another Wilcox mistake when Mario Oliver scored from third base on a passed ball, making the score 5-3 in the bottom of the second.

Wilcox added two more runs in the top of the third, but Southside responded again in the bottom half of the inning, when two straight Southside base runners — Gibbs and Murry — scored because the Jaguar catcher couldn’t stop the pitch, pushing the Panther lead to 7-5.

The Panthers kept piling it on, as Oliver hit a shot to deep left-center field that resulted in a triple and drove in teammate Mark Black, making the score 8-5.

Mikal Brown produced more offense for the Panthers when he hit a line drive to center field that brought Oliver home and made it a 9-5 game after three.

After holding the Jaguars scoreless in the top of the fourth, Southside produced five runs in the bottom of a fourth inning that included RBIs from Black and Murry, and runs scored by Gibbs, De’Ante Bennett, Murry and Black, as the Panthers were able to capitalize off Wilcox pitching mistakes.

Southside had a 14-5 lead, but Wilcox responded with a six-run inning in the top of the fifth that put pressure on the Panthers and made the score 14-11.

Southside added a run in the bottom of the fifth inning when Gibbs stole third base and went on to score as the Jaguars overthrew the third baseman attempting to tag Gibbs out, making the score 15-11.

Wilcox tacked on two runs in the top of the sixth inning to make it 15-13, but Southside put the Jaguars away in the bottom of the sixth, as Chris Raymond and Gibbs scored on wild pitches, Murry scored on a walk with bases loaded, and Oliver hit a shot to deep right-center field that drove in Joshua Jackson, Sullivan and Black, pushing the Panthers further ahead at 21-13.

Oliver went on to score on a passed ball in the inning to round out the scoring for the Panthers.

Brown had eight strikouts in five innings pitching for the Panthers.

“It builds confidence going into to next week. We have one more game against Selma High next week,” Solomon said. “It also helps going into next season. The core of the team is coming back, so we’ll be ready.”