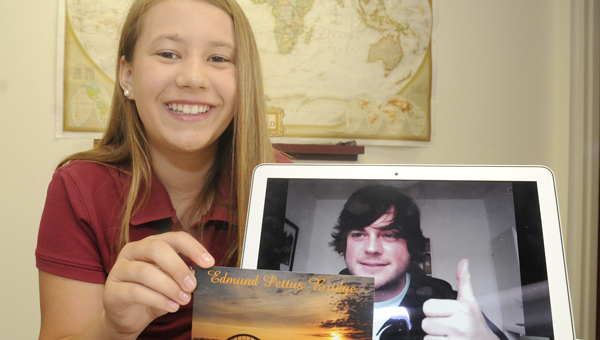 Morgan Academy sixth grader Kenzie Horton shows off one of the postcards she sold to help raise money to pay to send a girl from Meto, Kenya to attend secondary school. Joining Kenzie is Integrity Worldwide director Alan Hicks Jr., who talked with Kenzie by Skype Wednesday, while he is visiting family in Germany. -- Tim Reeves

Kenzie Horton is still a few years away from high school. The Morgan Academy sixth grader has a few more classes and a few more obligations, before she can stake her claim as a high school student, but she is already helping one girl achieve her dream of attending high school.

Through fundraising efforts that began selling postcards she produced at the annual Bridge Crossing Jubilee in early March and ending with a yard sale, Horton has raised enough money to pay for one year of tuition for a girl in Meto, Kenya to attend a secondary school.

In conjunction with Selma-based Integrity Worldwide, the money raised by Horton, has the potential of changing a lot of lives in this impoverished area of Kenya.

“What we were thinking is that if you have a girl who is married at the age of 13 — she doesn’t go to high school — she’s going to have 10 to 12 kids and then they won’t be able to go to school. Maybe only one of those kids will go to school and so it just expands that whole cycle,” Integrity Worldwide director Alan Hicks Jr. said via Skype interview and meeting with Horton Wednesday. Hicks is currently spending time with extended family in Germany after a recent trip to Kenya. “What Kenzie did, her girl will be able to go to school. She’ll be able to get a job and you can imagine that if she were a nurse, and had only four kids, she could afford to send all of those kids to school. So they’ll go to school and their kids will go to school.

Hicks said Integrity has 30 children in Meto that are poised to attend secondary school, but only five are currently sponsored, meaning there are 25 more who need funding to go to school.

“It roughly costs about $35 per month to send these children to school,” Hicks said.

He said the money not only pays for tuition, but also covers room and board, books and other needs.

For Kenzie, age 11, this project was not one for ego, but rather one she felt called to do.

“I’m don’t want to brag about this,” Horton said. “I just want others to learn about it and to go through Christ.”

In fact, Horton wants others to take part in helping raise more money for the scholarship program.

With her birthday just a few weeks away, Horton has invited friends to come to a party, but instead of bringing gifts for her, she’s asking they make donations to Integrity Worldwide.

“This is so awesome. She is in the sixth grade and look at what one person is able to do,” Integrity Worldwide’s Averee Hicks said. “That just blows you away that her heart would be so for this.”

During Wednesday’s video meeting, Hicks even mentioned the possibility of Horton meeting her sponsored child face-to-face.

“Thank you so much for thinking about that, thinking about this project,” Hicks told Horton. “And I was just thinking how cool it would be if one day you’re able to come with us, come to Kenya and meet the girl you helped send to school.”

In an effort to continue raising money to sponsor scholarships, Horton said she has plans to talk to some Selma-area retailers about selling the postcards in their stores.

For more information on Integrity Worldwide and this initiative, call (334) 526-1238 or log on to www.integrityworldwide.com.

For two area men, coming to a stop at a downtown Selma stoplight wasn’t the problem. Rather, coming to a... read more