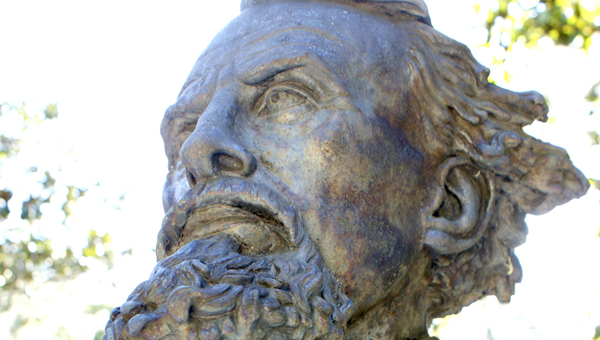 Selma Police are continuing to investigate who might have stolen this large, bronze bust of Confederate general Nathan Bedford Forrest from Live Oak Cemetery earlier this month. Private contributors have raised $20,000 to offer as reward for information that leads to arrest and conviction of those involved.

More than two weeks after it was first reported missing, the bust from the Nathan Bedford Forrest statue in Live Oak Cemetery is still missing. But now, supporters of the monument are putting plenty of money behind their efforts to both find the bust and those responsible for its theft.

Tuesday, The Friends of Forrest, the group that originally funded the monument’s creation in 2000, announced a $20,000 reward for information leading to the “arrest and conviction of the person or persons responsible for this crime.”

“Understanding that the history and heritage of the many people groups who make up the state of Alabama are intertwined to form the common bonds of the people of Alabama, it is the belief of the Friends of Forrest that all history must be preserved and protected for future generations,” the organization said in a press release Tuesday. “The Friends of Forrest strongly condemn this attack and call for all persons to stand against any attack on our common history, its monuments or memorials.”

The large, bronze bust was reported stolen Monday, March 12, when employees with the city of Selma were working in Live Oak Cemetery and noticed the bust was missing.

The memorial, when first created was placed at the Vaughan-Smitherman Museum, before being moved to the Confederate memorial in Live Oak Cemetery in 2001.

The Friends of Forrest, in their release Tuesday, said the bust itself was commissioned in August 2000 at a cost of $9,000.

“We don’t have any leads at this point. We have had a private group step forward with a significant amount of reward money — in addition to the money provided through CrimeStoppers,” Selma Chief of Police William T. Riley said. “We are just asking people with any information to please contact us — or CrimeStoppers — so we can get this bust found.”

The monument — since its placement at Vaughan-Smitherman in 2000 — has drawn a lot of criticism and been the point of contention for large segments of Selma’s community.

Forrest — in addition to his service as a Confederate General and the commanding officer of the Confederate forces in the Battle of Selma in April 1865 — also served as a Grand Wizard in the Klu Klux Klan.

“If you look at our cemetery, we have a lot of historical items in the cemetery and no one wants items stolen out of the cemetery regardless of whether or not the item stolen is controversial,” Riley said. “It is an item that is valued at several thousands of dollars and someone took it — someone stole it — and that is a crime.”

Also in Tuesday’s release, the Friends of Forrest said the $20,000 reward is in addition to “any reward that may be offered by CrimeStoppers and is privately funded by the Alabama Division and International Headquarters of the Sons of Confederate Veterans and private individuals.”