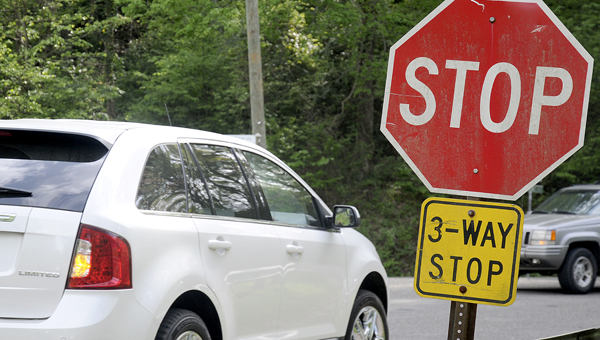 If the city of Selma receives state funds for paving, the area around this three-way intersection on Old Cahaba Road could see work by the end of this year. -- Tim Reeves

The Dallas County Commission and the city of Selma have joined the fray of municipal and state governments competing for a portion of a highway improvement program that could mean hundreds of thousands of dollars in road work for the area.

Monday, the commission authorized county engineer Coosa Jones to submit a plan for needed road work to the Alabama Department of Transportation, just days ahead of the deadline. The county’s submission comes nearly a week after the Selma City Council gave approval for the city jumping into the effort.

“We may get it, we may not,” Selma Mayor George Evans said. “We are competing with a lot of cities for this money and a lot of county governments. All I know is if we get it, we have areas of town that could really use the attention.”

The Alabama Transportation Rehabilitation and Improvement Program was announced by Gov. Robert Bentley in late February, and in doing so, Bentley said the program was designed to help bring jobs to underdeveloped areas of the state.

“This will create jobs and draw industries to underdeveloped regions of the state,” Bentley said in his announcement. “There is no better time to invest in our roads and bridges than today.”

During Monday’s commission meeting, Jones said if the county is awarded funds, portions of Dallas County Roads 115, 62 and 80 would be the first priorities.

In Selma’s case, two roads that see a tremendous amount of traffic could see crucial attention.

“Our hope would be to repave Old Cahaba road where it turns into Old Cahaba, just past the railroad tracks on J.L. Chestnut Boulevard, all the way to the three-way intersection with Crescent Hill and Old Marion Junction Road,” Evans said. “The other part — if we receive funding — would be Medical Center Parkway from the main intersection with Old Cahaba, all the way to U.S. Highway 80 West.”

Selma Community Development director Charlotte Griffeth said the proposed work could cost as much as $600,000, with $100,000 of that work being funded by the city in the matching portion of the grant.

Information on how much the county’s proposed work would cost was not available.

“These targeted areas see a lot of traffic and need some serious work,” Evans said.

But, with a pool of only a projected $38 million in the first allocation, it is hard to imagine both the city and the county getting all of what they have requested.

In a governor’s office release, Bentley outlined how the use of GARVEE bonds will finance the upgrades.  GARVEE is the term commonly used to describe the Grant Anticipation Revenue Vehicles Bond Program.  GARVEE bonds are an innovative method of financing highway and transit infrastructure in various locations.

“Borrowing makes good financial sense in this case because the cost of borrowing is as low as it’s ever been, and the cost of inflation on these construction projects is significantly higher than the interest rates we’ll pay on the bonds,” Bentley said. “In addition, the construction jobs this program will create are critical to continuing our state’s economic growth.”

According to an analysis by the Association of County Commissions of Alabama, they expect Dallas County to receive only $447,456 in the initial round of funding.

The deadline for counties and municipalities to submit their requests in this first round of funding is March 30.

Art Guild has class with glass

Selma artist Jo Taylor shows off some of her fused glass artwork during an art show at the Selma Art... read more