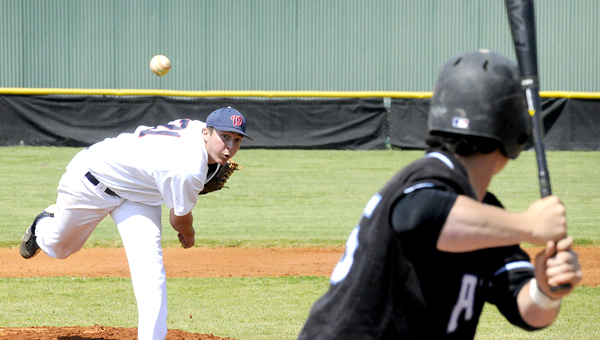 Wallace Community College-Selma pitcher Cody Carroll tosses a heater to a Chattahoochee Valley batter Saturday at home. The Patriots opened the doubleheader with a comeback win, but fell in the second game. -- Robert Hudson

The Wallace Community College-Selma Patriots got off to a hot start with a 6-5 win in the first game of a doubleheader at home on Saturday, but couldn’t carry over the momentum, falling 10-1 in the second game.

The Patriots (4-18, 1-8) split a doubleheader against the Chattahoochee Valley Pirates (18-14, 4-5) on Saturday, picking up their first conference win of the season in the process.

“The key to victory was our pitching hanging in there,” Elliott said. “When we got the lead, we were able to hold on, whereas in the past couple of games we haven’t been able to hold them off with the pitching. I think Gage Mooney came in and he just did his thing and held them off and we were able to win it. We got some timely hitting just when we needed it. With runners on, we finally got it done, against a strong, strong team.”

The Patriots got on the board first in the bottom of the third inning when Cody Hancock hit a shot to right field that scored Tyler Baxter and Michael Schofield to put Wallace ahead 2-0.

The Pirates responded in the top of the fourth inning when Taylor Hinshaw belted a two-run homer to left field and tied the game 2-2.

The Pirates continued the offensive display when David Levy hit a ball to left field in the top of the fifth inning that scored two runners and resulted in a double for Levy, making it a 4-2 game.

But the Patriots fought back in the bottom of the fifth when Schofield hit a ball to deep center field, tripled and scored a runner in the process to make it a 4-3 game.

The Patriots weren’t done in the inning, as Schofield scored from third on a sac fly hit by Todd Burkett, tying the game at 4-4.

Wallace maintained control, as Josh Gunter scored from third base on a wild pitch by the Pirates that made it a 5-4 Patriot lead in the bottom of the eighth inning.

Wallace scored again in the inning when Jace Harper hit an infield single that saw Wallace base runner Trevor Carnahan called safe at home plate after the Pirates failed to tag him out, putting the score at 6-4.

The Pirates scored another run in the top of the ninth inning, but Mooney was able to close out the game on the mound for the Patriots.

Elliott said Wallace couldn’t string anything together in the second game, as errors in the field and a number of walks helped the Pirates tally some of their runs.

The Patriots will take to the diamond again Tuesday, March 20 at Bloch Park against Central Alabama Community College starting at 5 p.m.

Wallace Community College-Selma will hold tryouts for women’s basketball and volleyball to bring in more talent after seasons that saw... read more