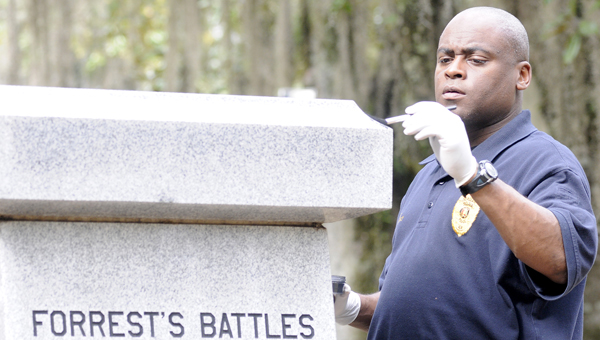 Sgt. Tori Neeley with the Selma Police Department dusts the top of the Nathan Bedford Forrest Monument for fingerprints Monday after a large, bronze bust of Bedford was discovered missing. -- Tim Reeves

Selma City Police and the city’s cemetery department are trying to figure out just what happened to the large, bronze bust of Confederate General Nathan Bedford Forrest — a bust that up until recently, sat atop a monument in Old Live Oak Cemetery.

“We were working in the cemetery today, putting down gravel and one of my guys looked over and then asked me what happened to the bust,” cemetery superintendent Michael Pettaway said Monday. “I’ll be honest, I don’t make a habit of looking over there every day. The last time anyone can remember seeing on top of the monument was Friday.”

The large monument, made of granite, has had a rocky history in Selma, drawing criticism from some groups due to the fact that Forrest — in addition to his leadership of Confederate troops in the Battle of Selma — is also credited as the founder of the Klu Klux Klan.

Shortly after its dedication in October 2000, the monument was vandalized and was later moved to its current location inside Old Live Oak, as part of the Confederate monument area.

The group that commissioned and funded the monument — the now idle Friends of Forrest — reportedly raised $25,000 to have the monument built.

Benny Austin, which was the group’s vice president, said he heard of the recent vandalism Monday afternoon.

“When I got the call, I just had an emotion of sadness,” Austin said as he looked at the now headless monument. “Since the monument was moved to this cemetery, it hasn’t been touched. That’s over ten years.”

Selma Chief of Police William T. Riley said his departments do not have any leads as of yet, but did spend part of Monday contacting all of the area scrap yards, notifying them of the theft and asking if anyone had attempted to scrap the bronze bust.

“At this point, we do not have leads and no one has attempted to scrap the head at any of the local yards,” Riley said. “This is just unfortunate and something we need the community’s help in solving.”