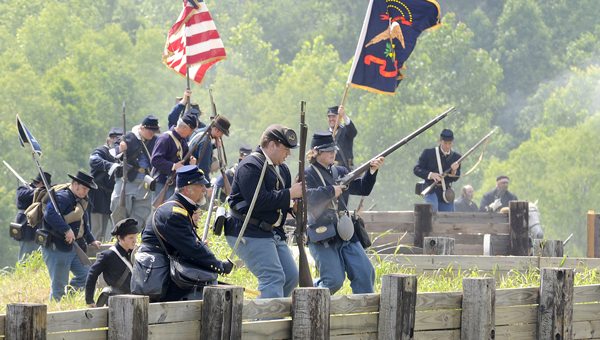 Preparations for the annual Battle of Selma are under way as the event gets set for 147th anniversary of the Civil War confrontation that took place in Selma. This year’s event will take place April 26-29.

The Battle of the Selma, which draws hundreds of re-enactors and countless visitors to Selma each year, is organized by a committee that is focused on an event that includes a cast of hundreds, horses, cannons and vendors.

“Spring is probably the busiest time for tourism in Selma, due in part to our favorable weather this time of year. Selma is a Mecca for history lovers in the spring, with three major events that are centered on our rich history: the Bridge Crossing Jubilee, the Historic Selma Pilgrimage and the Battle of Selma re-enactment,” said Selma Tourism Director Candace Johnson. “Tourism is a $5 million industry in Selma and the economic impact of all events are felt long after the events are over; from hotels stays, to meals in restaurants, to sales at gas stations and purchases at locally owned stores, the dollars left here turn over many times in our community and they are a vital part of our economy.”

The re-enactment committee has held meetings and recently held its first “work party” at the battle site. As members and volunteers gather together to discuss what needs to be done in the coming months, the community is mobilizing for events that will lead to the main events.

“Selma has long been known for its hospitality. Local input, involvement and support are the keys to success,” committee chair James Hammonds said. “Volunteers, April 1865 Society Members, local Businesses and Institutions provide the enthusiasm and financial backbone for all of these events. These are the reasons for Selma’s history of successful events.”

This year is a continuation of the planning efforts being made by local, state and national leaders in history and tourism to prepare for the 150th anniversary of the Battles of the American Civil War.

Invoice still a point of dispute