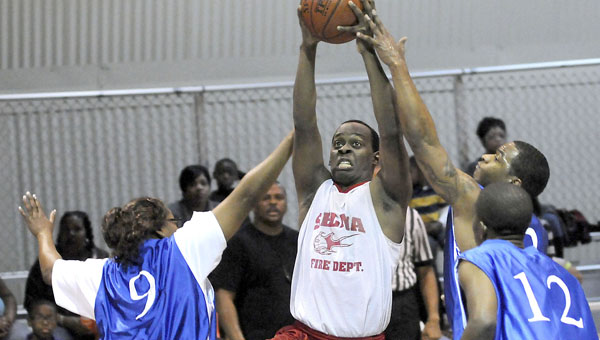 The Selma Fire Department’s Terrence Venter goes up over the Selma Police Department’s Evelyn Ghant for two points in a charity game between the two departments last year. Both teams will join forces to play the Harlem Ambassadors.

The Selma Fire and Police departments are teaming up to play the Harlem Ambassadors to provide local children with some fun and a few laughs.

The fire and police departments will play together and face the Harlem Ambassadors Monday, March 5 at 6 p.m. in the Concordia College gym.

“We’re just trying to get something different here for the people,” Cowan said. “They’ve been here before … it’s pretty fun and it’s geared toward the young kids. That made us want to get it here even more.”

Tickets are on sale prior to the game for $5 for middle school age children and under, and $8 for everyone else in advance.

Tickets can be purchased at the fire department, PAL Center or Selma High School in the days leading up to the game, and will be $10 at the door on game day.

Captain James Murphy with the Selma Fire Department, who will play in the game, said the Ambassadors will offer up entertainment and fun, tricks and antics similar to the Harlem Globetrotters.

Murphy added the game will give children a chance to see positive role models in action.

“The Ambassadors are there for entertainment,” Murphy said. “Somewhat like the Globetrotters, they put on a lot of laughs and gags and stuff like that. A lot of times people see us as being very serious, but this is a comedy type thing where we can get together and have a good time. Mainly it’s for the kids. We like to interact with the kids and show them positive role models within the city.”