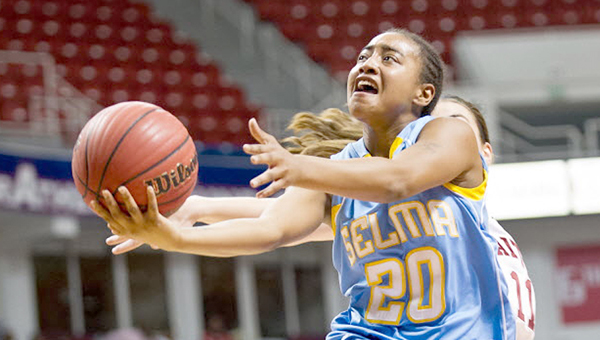 Selma's Jonishia Jackson leaps in the air and attempts a layup against Faith Academy Wednesday in Mobile. (Press-Register / Michael Chang)

MOBILE — The Selma Lady Saints (25-4) scored the first bucket and never led again en route to a 65-48 defeat at the hands of the Faith Academy (29-0) Lady Rams Wednesday at The Mitchell Center on the campus of the University of South Alabama.

“We never did get into the rhythm of our game in that first quarter,” said Selma head coach Anthony Harris.

After Jonishia Jackson scored off the opening tip just seconds into the contest, Faith mounted an 11-0 run to put Selma in the rearview mirror.

The Lady Saints got a bucket from Jameneshia Caver with four minutes to go in the opening frame to cut the deficit to 11-4 and break a near four-minute scoreless streak.

After Faith pulled away again, Selma’s Jasmine Peeples scored from two feet out, then connected on a pair of free throws on the ensuing possession.

After a quick Selma stop, Jackson scored a bucket in transition for a 6-0 Selma run, the last time the Lady Saints would make it close all afternoon.

“They played great defense,” Peeples said. “We couldn’t get the outside shots to open up the middle.”

The defensive strategy was executed perfectly according to Faith coach Woodie Head, who said he sent his assistants to Selma two weeks ago to scout the Lady Saints and Demopolis in the area final.

“We knew they were a very athletic team. Our scouting reports said they were not a very good three-point shooting team,” Head said. “We came out in a Triangle 2 and wanted to make them shoot from the outside.”

The strategy proved effective as Selma did not convert a three-point attempt until the fourth quarter when Brianna Richardson drained a late trey.

After trailing 36-20 at half, Selma cut the lead to 13 by the end of the third quarter and scored on the opening possession of the fourth to get to within 11. But the Lady Saints’ comeback attempt halted there.

“We were turning our offense over, but we weren’t stopping them on defense,” Jackson admitted.

The 11-point Faith advantage expanded to 20 when Sydney Westry scored with 5:55 to play to make it 58-38 in favor of the Lady Rams.

The Faith lead later ballooned to 23 before Head pulled his starters with less than a minute to play.

“My hats off to my seniors,” Harris said of the six players who donned Selma blue for the final time Wednesday. “I had six seniors this year. They’ve done well.”

Caver led Selma with 14 points and nine rebounds. Jackson finished with 13 for Selma. Peeples added seven in the loss.

The win, which moves Faith to the Class 5A Girls South Region, also puts the Lady Rams within one game of tying a school record for wins in a single season.