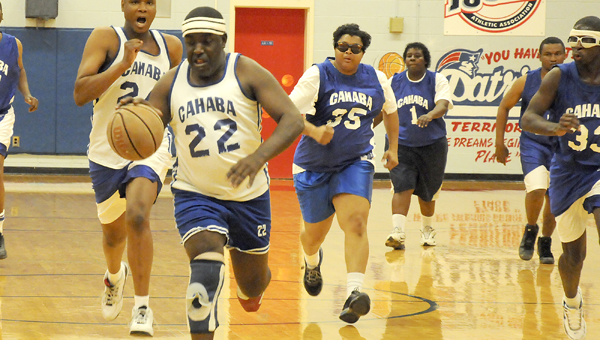 Cahaba Mental Health player Joe Wilson gets free on a fast break to score a basket in the team’s 42-26 victory over the Uniontown squad. The Selma team won the overall tournament championship over the Uniontown and Dothan squads. -- Rick Couch

This year, the home standing Selma team kept the trophy in town with a 42-26 win against the Uniontown branch.

The Selma squad was in a close game most of the way, but a 10-point run launched them to a 30-20 lead it never gave up.

The team felt great about getting the win, Cahaba Center director Lafon Barlow said. But, most importantly, everyone had a great time.

Attendance for this year’s event was again strong, Barlow said.

“I think attendance was great, and we were so happy (Dothan Leisure Services) came,” she said. “We were worried about how many teams we would have because funding is tight. We always have good local support, and thankfully (Dothan) was able to come too.”

The tournament pits teams from around the state with developmental disabilities. The games began in 2000 and some of the Selma Cahaba Center players have plenty of experience.

“A lot of our people have been coming here for quite a few years,” Barlow said. “This is a great program for the health benefits and to have people recognize their skills. It’s great that they are able to do this.”

This year, Tracy DauVaughn volunteered to coach the team to victory. Barlow said volunteer efforts are crucial to the program and greatly appreciated.