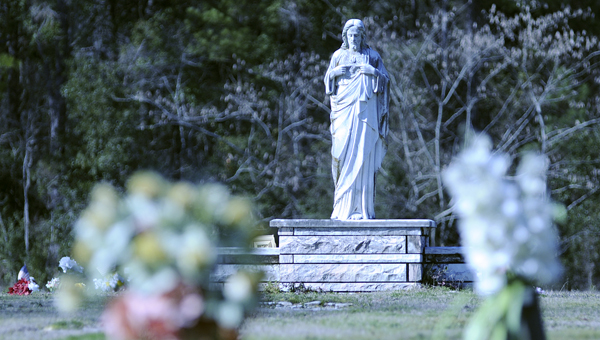 The city of Selma is looking for ways to open more space at Elmwood Cemetery on Water Avenue. Landscaping a piece of property on is expected to add more plots. -- Rick Couch

During his state of the city address, Selma Mayor George Evans alluded to the fact that space at a city cemetery is becoming tight.

Elmwood Cemetery, in particular, has become crowded. However, the city’s Cemetery Department is looking at ways to deal with these issues.

John Coon, who works with the department, said they are working to establish better records of just how many people are buried in the cemetery.

“It’s a tough situation because there are in excess of 3,000 burials and that probably doesn’t even scratch the surface,” he said. “There are 3,119 in our spreadsheet, but there has not been a survey done out there.”

They are also working to establish records of who owns some of the plots.  Right now, there are very few spaces available to new buyers, Coon said.

“There is only a small section out there we are still selling lots in,” he said. “There is about 13 spaces out there that we can sell. That doesn’t mean we couldn’t bury another 300 out there if someone says they have a family plot.”

But, Coon added, this problem will soon have a solution when a parcel of land becomes available as an extension.

“There is some land out there we have been reclaiming and cleaning up that the city owns,” he said. “We’ll gain a good many grave spaces once this is all excavated and cleaned up. We’ll plot it off.”