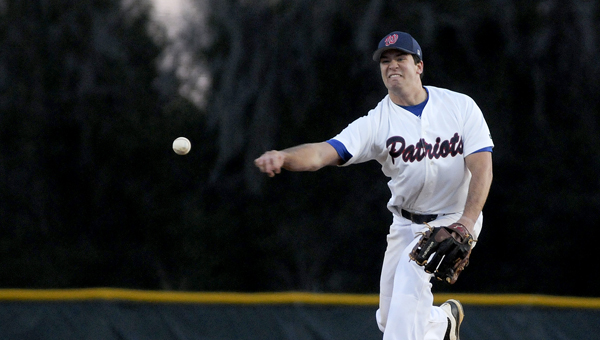 Erik Lawrence delivers a pitch to the plate during the Patriot baseball team’s 9-0 loss to Shelton State. -- Tim Reeves

The 2012 season got off to a rocky start for the Wallace Community College-Selma baseball team, as the Patriots fell 9-0 to the Shelton State Buccaneers at Bloch Park on Wednesday.

Frank Elliott, head coach of the Patriots (0-1), said his team hasn’t been able to get the work in to be where it needs to be starting off the season, but it will rebound after the loss.

“First game of the season, we hadn’t been able to do as much work as we would like to because of the weather here lately. It’s just been raining and we’ve been out in the mud trying to practice,” Elliott said. “I think Shelton has played four games, so it’s a little bit of difference there. We just didn’t get the reps in that we needed at this point, but we will eventually. We’ll catch up with it.”

The Buccaneers got off to a hot start, as J.C. Wilhite drove in a runner from second with a single in the top of the first inning.

Then Shelton’s Darren Whatley brought Wilhite home on a sacrifice fly to make the score 2-0 in the top of the first.