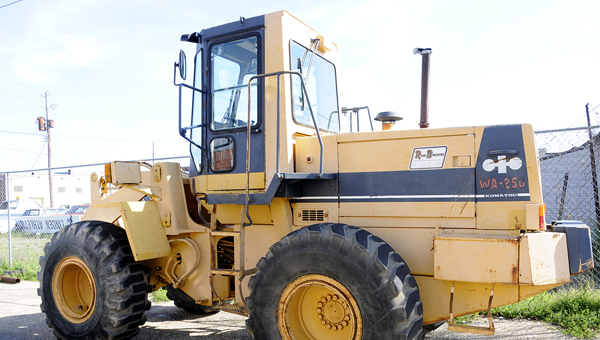 This front end loader was accidentally delivered to the wrong address and scrapped before being recovered by Selma Police. -- Rick Couch

It hasn’t been unusual for criminals to steal items like copper wire or scrap metal to make money from recycling services.

But one local man, Alfred Green, took it a step further last week when he sold a stolen Komatsu front-end loader at Coastal Recycling.

“On Jan. 2 the tractor was delivered to Selma, but it was supposed to be delivered to Milbrook,” Neely said. “The driver of the truck that delivered it called for directions, but he dialed the wrong number. He got a gentlemen here in Selma and he gave him directions to his house.”

The tractor was dropped off and the driver left, Neely said. The rightful owner contacted the trucking company and was told it had been dropped off.

They then filed a police report and the department began to investigate the incident.

“We put word on the street that we were looking for it, and we received a call from an informant,” Neely said. “(The informant) told us the tractor had been sold at Coastal Recycling out by the county jail.”

Neely and Lt. Johnny King rode out to the recycling plant, where they identified it as the stolen tractor by the serial number.

Management at Coastal said they had purchased the tractor from Green and provided a bill of sale and purchase receipt for $2,400.

The department recovered the tractor and worked with deputies from Lowndes County to track Green down. Green turned himself in on charges of receiving stolen property.

Green also had a second warrant for forgery.

He is currently being held in the Dallas County Jail.

Neely said the case remains under investigation and more arrests could follow.

“We think there were a couple of more people involved,” he said. “We’re still trying to identify who those parties are.”