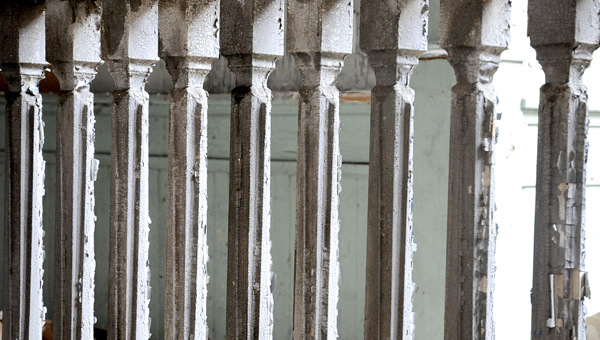 Wooden banisters line part of a stairway inside the old YMCA building in downtown Selma. The Selma-Dallas County Historic Preservation Society has a contract pending to buy the building. -- Tim Reeves

Nearly two weeks after she surprisingly announced to the Selma City Council her group had reached an agreement to purchase the old YMCA building on Broad Street, Nancy Bennett and the Selma-Dallas County Historic Preservation Society are still negotiating. But those negotiations are not with the building’s owner Tom Bolton.

During her announcement on Jan. 24, Bennett said there were a number of contingencies that remained to be worked out before the sale of the building could close. One of those contingencies was to work with First Baptist Church, asking they abandon their first right of refusal agreement they had with Bolton.

Bennett said Saturday she was presented a list of eight questions from the church last week, questions she answered and returned. Now, she said, the church has elected a few members to “negotiate” with the society on working out any final details.

“Yes, this is taking longer than I had thought, but remain cautiously optimistic and confident we will get this done,” Bennett said.

Tally Ho manager Renee Wilkerson shows off one of the restaurant’s New York strip steaks that are the talk of... read more