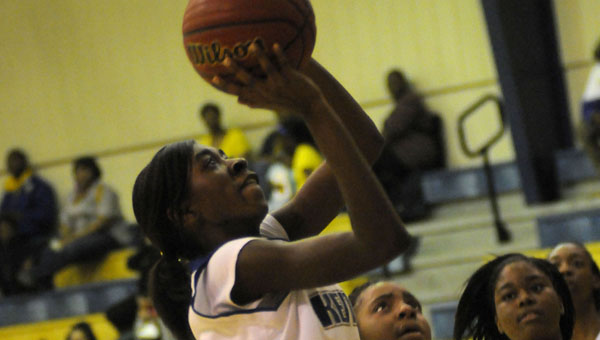 Lyteisha Phillips fires off one of many buckets for the Lady Bears in a 89-41 win over John Essex. The Lady Bears improved to 17-5 on the season with the win. -- Robert Hudson

The Keith Lady Bears took control early and never looked back, as they defeated the John Essex Lady Hornets 89-41 at home on Tuesday for senior night.

Cecil Williams, head coach of the Lady Bears (17-5, 8-0), said the game gave him the opportunity to get some experience for his bench players as Keith prepares to host the Class 1A Area 5 tournament next week.

“This basically gave my team a chance to practice on some skills, plays and things that we needed to go over, so it was a pretty good practice game for us,” Williams said.

The Lady Bears set the tone early, taking a 28-9 lead into the second quarter. The Lady Hornets made a small run against the Keith bench to make it 36-23 with 2:36 left in the first half, but the Lady Bears’ starters returned and pushed the lead to 46-26 at the half.

Keith opened the second half on a 19-0 run that lasted 4:25 and ended the third quarter ahead 73-29. Keith’s lone senior Naadira Pettway helped lead the way with 14 points, while Lyteisha Phillips added 14 points, and Dasheena Thomas added 10 points for the Lady Bears.Tricia Richardson led the Lady Hornets with 13 points, while Latoria Fields had 11 points for John Essex.

Rodney Ellis pulls up for a jumper in the Keith High School men’s 59-57 win over the visiting John Essex... read more