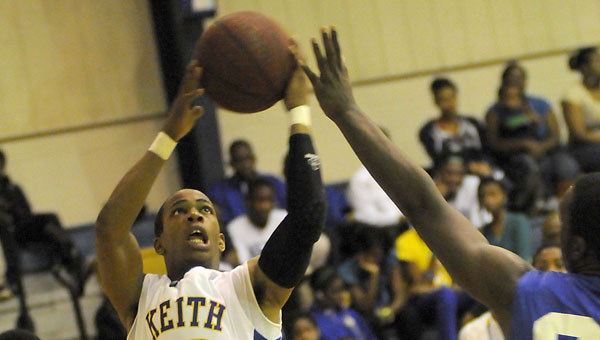 Rodney Ellis pulls up for a jumper in the Keith High School men’s 59-57 win over the visiting John Essex Hornets. Keith struggled throughout the game but did what they had to do to pull out the victory. -- Robert Hudson

It was senior night for the Keith Bears, yet the youth of the John Essex Hornets nearly prevailed, as the No. 4 Bears escaped 59-57 at home on Tuesday in a battle of Class 1A teams.

Tommy Tisdale, head coach of the Bears (18-10, 8-0), said his team played sloppy thanks to a tough performance by the Hornets (6-15), and was lucky to escape with the win.

“It was raggedy from the start,” Tisdale said. “Hat’s off to John Essex and coach Chase (Lewis, head coach of the Hornets). I told him at the end of the game that they deserved to win this game. I think they out hustled us. They did the things that we’ve built our success on—they beat us to loose balls, they made the second chance shots.”

In a game that featured ten lead changes and saw the Bears go into halftime trailing 27-26, Keith was able to get ahead late and held a 57-52 lead with 0:37 remaining.

A Bears’ foul sent Cedrie Cooks to the line where he made the first and missed the second free throw, but the Hornets got the rebound and Michael Moore drained a 3-pointer making it a 57-56 game with 0:25 remaining.

The Hornets fouled the Bears in order to extend the game, sending Keith senior Arthur Murry to the line where he missed both free throws.

The Bears were called for a foul and sent the Hornets to the line where Anthony McIntosh made the first free throw to tie the game at 57-57 with 0:14 remaining, but missed the go-ahead free throw.

The Hornets were called for another foul, again sending Murry to the line, but this time the senior hit both free throws to put Keith ahead 59-57 with 0:12 left the play.

The next possession, Keith forced a turnover and was sent to the line again, but failed to put the game out of reach, missing both free throws with nine seconds remaining.