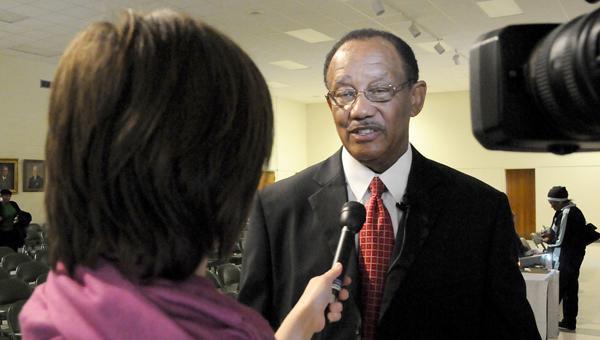 Following his afternoon presentation of the State of the City Address, Selma Mayor George Evans spent time meeting with members of the media. Here, Evans, is interviewed by WSFA in Montgomery. -- Tim Reeves

In a presentation that talked of long-range plans of a zoo, aquarium and a recreational boat fleet, Selma Mayor George Evans painted a picture of a Selma that was strong financially, improving economically and had a future much improved than when he took office just over three years ago.

During his annual State of the City address, Evans focused on the work of each city department in 2011, work that was done with fewer resources.

“I cannot compliment the work of our city employees enough,” Evans said. “They have had to adopt the policy of doing more with less and they have done that with great skill.”

Evans said the city has had to make tough choices during the past few years thanks to economic pressures of years of recession and now an economy that is sluggishly growing. But even though those choices had to be made, Evans said the city is stronger and progress is being made throughout Selma.

“I think many would be surprised to learn just how much is happening,” Evans said following his presentation. “Everyone seems to think that we don’t have jobs coming in, but that’s not the case. Most don’t have a concept of all the businesses that have opened in the city in the last 18 months, the retail businesses that have brought jobs.”

According to city reports, $307 million in retail sales were reported in Selma during 2011, and that those businesses accounted for 2,612 local jobs. Evans said during 2011, 172 new business licenses were issued and that 10 new retail businesses opened their doors.

“Most would be surprised,” Evans said of the report. “For many, they’ve been told one thing, heard one thing, and the truth is progress is being made.”

In addition to the openings in the retail and business market, Evans said $10.6 million in construction or renovations were accounted for through the city building permits.

Gate to the future