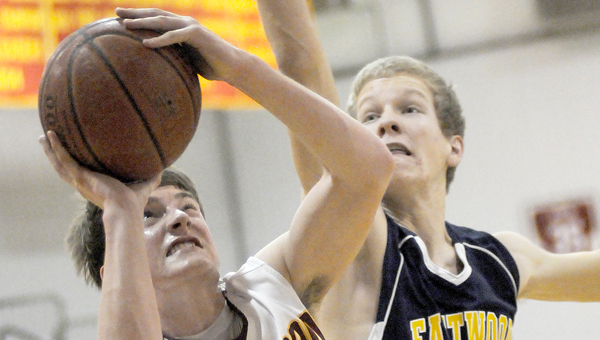 Morgan’s Connor Henderson goes up for a shot against Eastwood’s John Bode. The Senators could not overcome the Warriors hot shooting, as they fell 63-51 at home on Saturday. -- Robert Hudson

The Morgan Academy Senators couldn’t overcome an early barrage of 3-pointers, as they fell 63-51 to the Eastwood Christian School Warriors at home Saturday.

Bob Taylor, head coach of the Senators (11-13, 3-5), said Eastwood’s three-point shooting was the key to the game, but he’s proud of his team’s defensive effort in the second half.

“They came out and were blistering shooting the three in the first half and we didn’t step out like we needed to,” Taylor said. “They did a good job shooting the ball, moving around and got us in some spots we didn’t need to be in. Second half I was very pleased with the way we played defensively. We got after it, we played hard and with a lot more intensity. Eastwood just came out on fire.”

Eastwood came out strong, hitting seven 3-pointers in the first half, including four in the second quarter, and took a 35-21 lead into halftime.

The Warriors maintained a double-digit lead late into the game, but the Senators made a push.

The Senators got to the free throw line on their next possession and Ford Manderson hit one of two, bringing Morgan within ten points at 51-41.

But the Warriors countered with a pair of free throws of their own from Jesse Jones to make it 53-41 with 4:08 left, as both teams were in the bonus late in the game.

Morgan came right down the court and McCain Levins was fouled on a layup, but did not hit the free throw, as the score stood at 53-43 with 3:26 left to play.

Lee led the Senators with 19 points, while Connor Henderson added 11 points, and Levins had 9 points.

The Senators will take the floor again at home in their final game of the season on Tuesday against Crenshaw Christian Academy with games starting at 5 p.m.