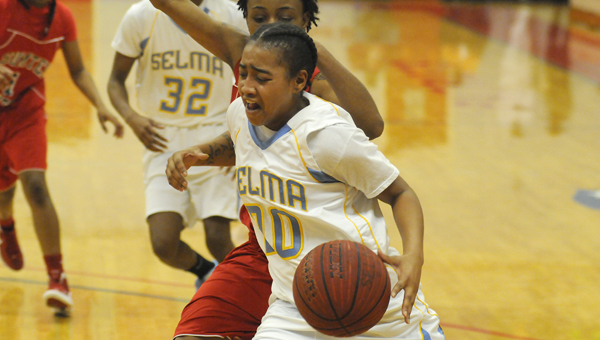 The Selma Saints held a double-digit lead late in the game, but had to withstand a late comeback attempt to defeat the Sumter Central Jaguars 58-52 at Wallace Community College-Selma on Saturday.

“We played with some guts tonight,” Jackson said. “We pressured them and hung in there tonight. We played hard all the way through.”

Selma answered right back, as Quinterrius Rogers scored under the basket to put the Saints up 43-41 with 5:36 left to play.

Both teams exchanged baskets back and forth, but the Saints still held a slight edge at 50-48 with 3:31 left.

The Jaguars struck again as Michael Hutchins scored in the paint to tie the game at 50-50 with 2:14 left.

Selma countered the very next possession as Darion Alexander drained a 3-pointer to put the Saints up for good at 53-50 with 1:53 left.

The Jaguars couldn’t get the shot to fall on their next possession and were forced to foul down the stretch, and Selma went 4 for 5 from the free throw line in the closing minute.

Kerry Mitchell had a double-double for Selma with 12 points and 10 rebounds, while Tavarius Murry added 10 points and seven rebounds for the Saints.