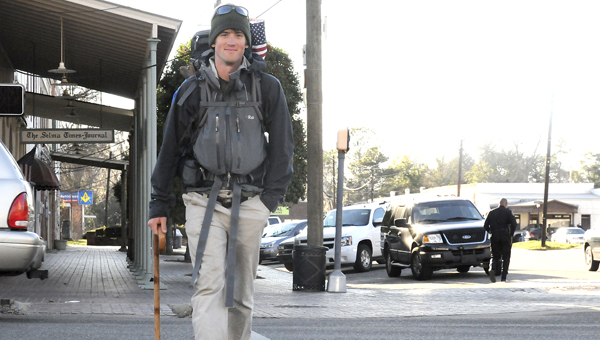 Andrew Forsthoefel, who recently graduated from Middlebury College in Pennsylvania is using his feet and his ears to collect interesting stories. -- Rick Couch

One step at a time, Pennsylvania native and recent Middlebury College graduate Andrew Forsthoefel is getting to know America personally.

The 23-year-old, who earned a degree in Environmental Studies, left Philadelphia in November and will eventually end his trip in California.

Though he will make the trip on his feet, Forsthoefel said his ears would play the most important role.

“The idea is everybody has an amazing story to tell, so I’m walking to listen and hear as many stories as possible,” he said. “I wanted to slow down, and you don’t miss anything when you’re walking. It’s a diverse country, and I want to see and hear everything.”

When he recently arrived in Montgomery, Forsthoefel said he felt he would be cheating himself if he didn’t take a detour through Selma.

“I was in Montgomery and thinking about the history of this place,” he said. “It felt wrong not to head west into Selma, so I did.”

When he first left home to begin the walk, Forsthoefel said he expected many lonesome nights camping in the woods. However, he said he has had plenty of company and support in each town.

“The thing I’ve been most blown away by is the way people have taken care of me,” he said. “I thought I’d be camping and lonely. I’ve been amazed at the goodness of people pulling over to say hi and giving me money for lunch. You hear a lot of bad about people, but there is a lot of good out there too.”

The trip, Forsthoefel said, is something he always wanted to do. When he finished school, he said the timing seemed perfect.

The hardest part was just getting out and doing it. I’ve been wanting to do something like this for years and after college it seemed like a good time.”

Forsthoefel said he walks between 10 and 25 miles each day depending on who he meets and the stories he hears.

After leaving Selma, Forsthoefel said he plans to make his way to New Orleans. After that, he said he will head west.