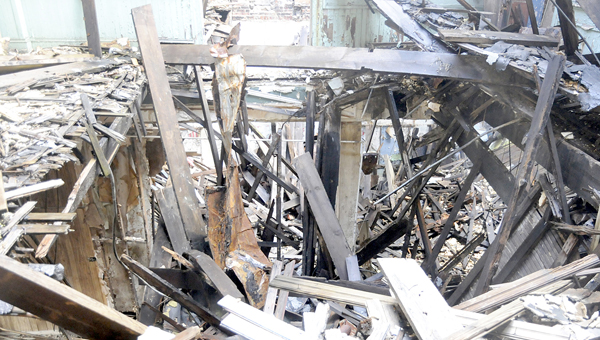 A photo from inside the old YMCA building on Broad Street shows floors inside the building have collapsed on one another, leaving a hole looking down on the bottom floor. A portion of the historic building’s roof has also collapsed, exposing much of the building to the elements. -- Tim Reeves

In a simple release, the Selma City Council called a special meeting for Tuesday afternoon that may signal the end of one of Selma’s most iconic buildings.

In announcing the meeting, which is scheduled for 3 p.m. in the council chambers, the council is scheduled to hear an appeal from Tom Bolton, owner of the old YMCA building on Broad Street.

During last week’s regular council meeting, Swift Drug Company owner Buddy Swift, told the council the building — which is crumbling under a collapsed roof and floors — should be removed. Swift’s building neighbors the YMCA on Broad Street.

“I first came before this council in June of 2010 to alert you of the dangerous condition of this building and request it be declared a public nuisance,” Swift told the council. “Now, close to two years later, nothing has been done. I have been no credible economic proposal to save the building. I know some of you have worked hard to save this building, but I feel the time has come to ensure no one is killed, injured and no property is destroyed.”

During his interview, Bolton said renovating the building is not feasible economically, saying it would cost millions to restore the building.

And, he added the idea of stabilizing the façade of the building — which has been suggested by local historical groups — would cost an estimated $750,000. For Ward 3 councilmember Greg Bjelke, who has worked to find a resolution other than tearing the building down, stressed during Tuesday’s meeting that “there is action being taken.

There is a lot of behind the scenes shuffling of papers back and forth.”

Bjelke, who is a member of the Selma-Dallas County Historical Preservation Society, said he doesn’t understand why Bolton won’t simply unload the building.

“We wish he would give it to the society. He just needs to turn it loose. If it’s such a pain in the — then let it go. Give it, sell it, get rid of it.”

Bolton has said he would sell the property and building for $55,000. But, if he did not have any offers, and if he were ordered to demolish the building, there were items within the building he would remove such as banisters, columns and other architectural items of value.

“It is a public safety issue at this point and we need to get moving because if we have a rainstorm and somebody gets hurt, it’s a day late and a dollar short,” Ward 1 councilmember Tommy Atchison said last week.

Bolton said he proposed to demolish the building, a proposal which was blocked by the Historical Commission. During Tuesday’s meeting — which is not a public hearing and public comments will not be accepted — city attorney Jimmy Nunn said the council would have options.

“If council decides building is a public nuisance, options are uphold code enforcement, letter stating it is a nuisance requiring Bolton to stabilize the building,” Nunn told the council. “Council can also rule it is not a nuisance or require it to be torn down.”

Andrew Forsthoefel, who recently graduated from Middlebury College in Pennsylvania is using his feet and his ears to collect interesting... read more