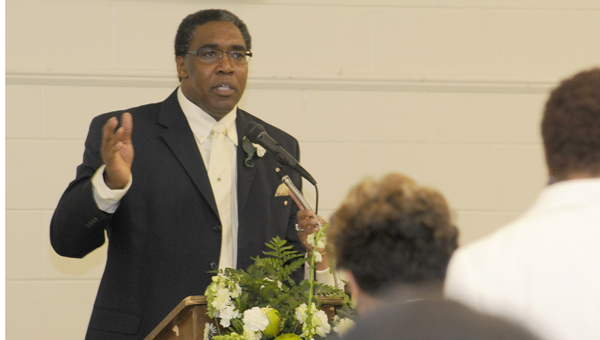 During the 19th Unity Breakfast, sponsored by The Links Inc., organizers discussed the profound impact Dr. Martin Luther King Jr. had on their lives, specifically Selma.

It seemed appropriate, Shirley Grear said, that a ceremony be established to remember King’s legacy.

“We began this breakfast 19 years ago to bring this community together through involvement, fellowship and friendship,” she said. “We celebrate the life and legacy of this great American Dr. Martin Luther King, Baptist preacher, social activist, iconic leader of the nonviolence movement, a true visionary.”

Through the breakfast, Grear said, King’s legacy can be remembered and honored.

“In honoring him each year, this time provides an opportunity for each of us to dedicate ourselves to Dr. King’s dream of racial, social and economic justice,” she said. “It is a reminder of the power and importance of service to others.”

The guest speaker for the event, Dr. Don Jefferson, said Selma was always a special place for King. As a resident of Selma, King said the Queen City has always had a special place in his heart as well.

“One thing I am extremely proud of, whether it was during my college days playing football, I always wore the badge of Selma as a symbol of pride and class,” he said. “I wanted people to know I was from Selma and that it meant something. I did the same thing in the 33 years I traveled across the state. I always carried myself with class and dignity and respect because of Selma.”

Through the years, Jefferson said a number of people in Selma helped him achieve his goals in life. Through their support, he said he has been able to come back to Selma to mentor young people.

“There are a lot of people I owe a debt of gratitude, black and white,” he said.

“People who have helped my family when we needed it most. My goal has always been to come back to this community and give something back to those who gave something to me. It was always a dream.”

Jefferson said people should be grateful every day for the price King paid.

“When I think about Dr. King and his legacy, or his contributions to humanity, there are profound thoughts that come to my mind,” he said.

“Dr. King, during a mass meeting at Brown Chapel Church, picked up a little girl and held her up to the audience, he said Cheyenne, like all other African American children, should have the same freedom to pursue their dream like children from any other race or ethnic group. This was his reason, his motivation for sacrificing his life for a cause.

“As I look around this audience this morning, I can only wonder how many of you today would be willing to literally and figuratively pick up a little child and sacrifice your lives?”

The past three months have been tough for him, Jefferson said. But, he added, he knows God has a plan.

“God always acts in your best interest, even when it is painful and you don’t understand it,” he said.