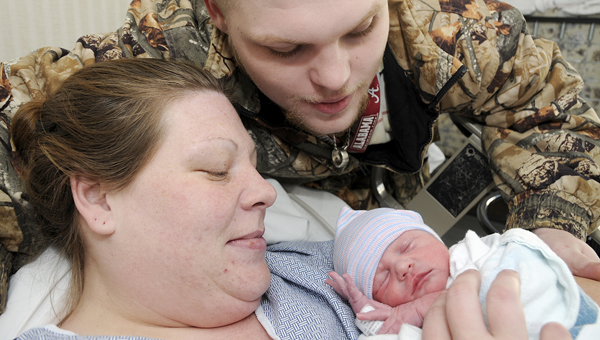 Logan and Krista Smitherman spend time with their daughter, Serenity Lorraine, just hours after she was born at Vaughan Regional Medical Center. Serenity was born at 10:18 Monday, making her the first baby born in Selma in 2012. -- Tim Reeves

The word serenity is often defined as “the state of quality of being serene, calm, or tranquil,” all the qualities you rarely use to describe a newborn child.

But for one Selma couple, that word is now the name of their new daughter Serenity Lorraine Smitherman.

Krista and Logan Smitherman are not only parents to a new daughter, but also parents to the first baby born in Selma in 2012.

“Last night when we got to the hospital, they told us there was a good chance that we would have the first baby of the year,” Krista said. “Then this morning, they came in and said we were about to have her.”

“My due date was Jan. 29, so we were a little surprised she decided to come on,” Krista said. “We had just finished eating dinner when my water broke.”

At home, Krista said she went to the restroom where she found her water had broken.

“But, that’s a good man right there,” she said. “If it weren’t for him, I wouldn’t have made it through this.”

In addition to making it through the pregnancy and delivery, the couple also made it through April’s tornadoes, while living in Tuscaloosa. The couple moved to Selma in November.

“We decided to name her Serenity because we just moved from Tuscaloosa and we pretty much left behind everything and started new,” Krista said. “He’s trying to find a job, so this is our serenity — this is our Serenity.”

As for Serenity, she’s in good health as is Krista, and for the rest of the family — all big Alabama fans — they are glad she was born on any other day other than next Monday.

“We were joking that we better have her either before the game or after the game,” Krista said. “So now we have this done and don’t have to worry delivering during the game.”

As for Logan, he’s getting used to being called a father.

A sign marks where Cooper Brothers Construction will build a new field house on the campus of Selma High School.... read more