Ellwood readies for move to AHSAA 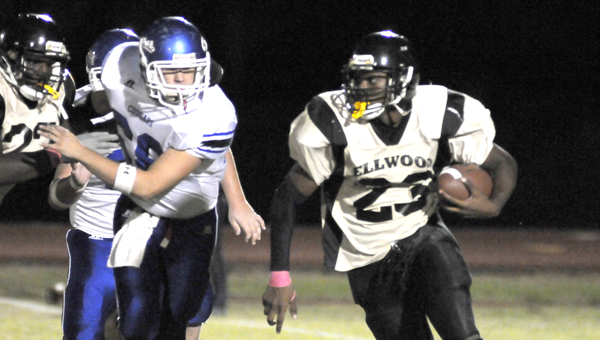 Deriaun Glenn finds running room in a 48-16 loss to Crenshaw Christian Academy. The Eagles will again face stiff competition as they make the move to the Alabama High School Athletic Association. -- Robert Hudson

After the recent Alabama High School Athletic Association (AHSAA) reclassification for 2012-2014, many high school programs are preparing to see some new foes in their area, but for Ellwood Christian Academy there comes the added task of getting familiar with a new association.

Mike Stokes, head football coach at Ellwood, said the move has been smooth so far.

“It’s been a pretty smooth transition,” Stokes said. “We just know that the rules are a little different and competition is going to better, so that just makes us work harder.”

Stokes said the Eagles new area is filled with traditional powers such as Keith, Maplesville, Autaugaville and Billingsley, who all made appearances in the state playoffs this past season including Billingsley in Class 2A.

Stokes is looking to build the Eagles’ football program to the same level as its future region foes.

“Autaugaville, Billingsley, Maplesville, Keith, all those teams are good, powerhouse, traditional teams that we are in the process of trying to get where they are,” Stokes said. “That’s what we’re looking at. We’ve just got to start from day one and build just like they have done. I have spoken to plenty of coaches and tried to see how they have built their program.”

As for the non-region schedule, the Eagles have lined up games against Class 2A Francis Marion in week one, Class 1A A.L. Johnson in week five, and Class 5A Selma High School in week 10.

Stokes agrees that games against local opponents will benefit all involved on a number of levels.

“I’m in agreement with all of them, especially travel, financially, it will benefit all of us,” Stokes said. “Plus it will bring the community out to see some good football, and we just want to make it into a good, clean rivalry where people can come out and watch a good football game and conversate with other people from other different schools.”

Stokes said the move to the AHSAA also has the added bonus of creating more exposure for Ellwood’s student-athletes.

“We’re just glad to be in the Alabama High School Athletic Association,” Stokes said. “I think it’s going to give our kids more exposure to college scouts, and we’re just proud to be a part of it.”