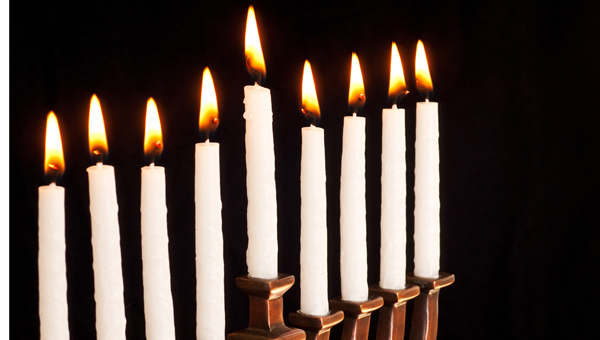 Tuesday evening, Jewish families will begin the eight-day celebration of Hanukkah by lighting the first candle on the menorah. -- Special photo

Later this evening, Steve and Laura Grossman will light the first candle of the menorah to bring in the first day of Hanukkah, a Jewish holiday.

In the past, Steve said people would use a bowl of olive oil to burn a light, but today they use light bulbs.

“Today, every Jewish synagogue has an “eternal light” that’s always burning … to show the eternal nature of God,” Steve said. “Some people have tiny dishes of oil in (the) menorah instead of eight candles. Most people use multicolored candles for the beauty …”

Tuesday marks the beginning of the eight-day commemoration of rededication of the Temple in Jerusalem by the Maccabees after their victory over the Assyrian Greeks of the period. Hanukkah lasts eight days because after the Maccabees rededicated the Temple, there was only enough oil for the “eternal flame” to burn one day. The flame lasted eight days.

“It was a miracle it lasted all that time,” Steve said.

With many Jewish families having owned businesses along Broad Street, Selma has a long Jewish history. Selma’s Jewish population once celebrated Hanukkah communally, but have not in recent years.

“Several families do observe it in their own homes,” Steve said. “I have a menorah (and) my wife and I light the candle. One night you light one candle, and the second night you add two candles, et cetera, until on the last night, you have all (candles) burning at the same time.”

Traditionally, Jews light one candle on a menorah and also give one gift each night. Steve said “gift giving” is usually reserved for children.

“Giving gifts is a tradition when children are involved — (it’s) not customary for adults to give gifts,” Steve said. “When children get involved, they will get a gift each night, like socks on one night or maybe a small book on the next.”

Food, such as that which is fried in oil to commemorate the oil in the Temple, is also a part of the Hanukkah celebration.

“The food has to reflect the same theme as the oil,” Steve said. “Among western Jews in Selma, whose ancestors are from Europe, the tradition is Latkes, or potato pancakes, fried in (olive) oil. In Eastern countries such as Iraq, Egypt, Syria or North Africa, it’s a form of donuts — also fried in oil.”

Hanukkah, Steve said, is considered a minor festival in the Jewish calendar.

“It has become more important in the U.S. because it’s celebrated the same time as Christmas, making sure Jewish kids aren’t left out by not having a Christmas,” Steve said. “It’s not a high holy day like Yom Kippur or the three major festivals. It doesn’t have the same significance as Christmas does for Christians.”