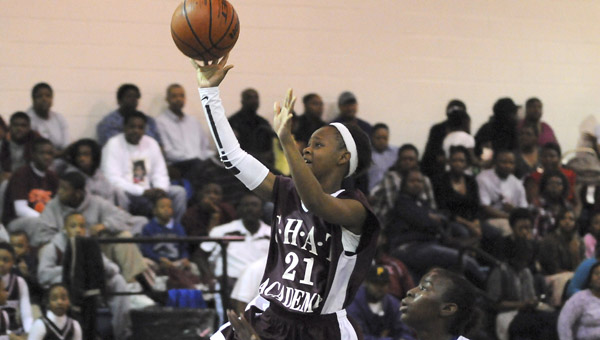 In game that was dead even at the half, the Selma Middle CHAT Academy boys basketball team would ride a strong second half to victory, as they defeated the Tipton-Durant Tigers 44-36 Thursday.

Derrick Randolph, head coach of the Bulldogs (12-1), said his team played hard and controlled the ball better in the second half.

“The key to victory was that we stopped making turnovers and we started making our layups,” Randolph said. “We just went out there and played our hearts out.”

The Bulldogs would trail 23-22 early in the third quarter, but that’s the last time they’d trail the rest of the way after an Aderick Moore lay in put them ahead 24-23 with 4:07 remaining in the quarter.

Moore’s basket would start a 12-0 Bulldog run to end the quarter, which included a Kiatavious Lewis three, and gave the Bulldogs a 34-23 lead going into the fourth quarter.

Tigers’ head coach John Solomon said his team couldn’t stop Lewis, who scored 13 points in the second half, but he’s proud of the effort they gave.

“We played great defense first half, but second half the boys got a little timid and they got scared of one ball player on their team and he pretty much took over,” Solomon said. “Other than that, I’m very pleased with their effort. They did extremely well. I wouldn’t trade these boys for the world.”

Lewis had 21 points for the Bulldogs.

Head coach Derrick Mitchell said the Bulldogs (8-2) played together in order to get the win.

“The key tonight was playing as a family, playing smart, playing together,” Mitchell said. “We played basketball the way we know CHAT knows how to.”

Fred Richardson led the Bulldogs with 9 points and Ladarious Woods had 8 points for CHAT.

A tough first quarter didn’t phase the CHAT Academy Lady Bulldogs, as they pulled away in the second to defeat the Tipton-Durant Lady Tigers 52-13 Thursday.

“We looked great as a team,” West said. “We played with a lot of cohesiveness. We did our job, we played Lady Bulldog basketball and pulled out the victory.”

The Lady Bulldogs (10-2) trailed 11-9 late in the first quarter, but Jamiya Smith would hit a mid-range jumper with seven seconds left, as the score was tied 11-11 at the end of the first.

The Lady Bulldogs opened the second quarter with Smith scoring a layup on a fast break to put them ahead 13-11 with 5:21 left in the quarter, sparking an 18-2 run that would have CHAT leading 29-13 at the half.

The Lady Bulldogs would hold the Lady Tigers scoreless the rest of the way.

Ayana Robinson and Jaquetta Daily led the Lady Bulldogs with 10 points a piece, while Smith added 8 points for CHAT.