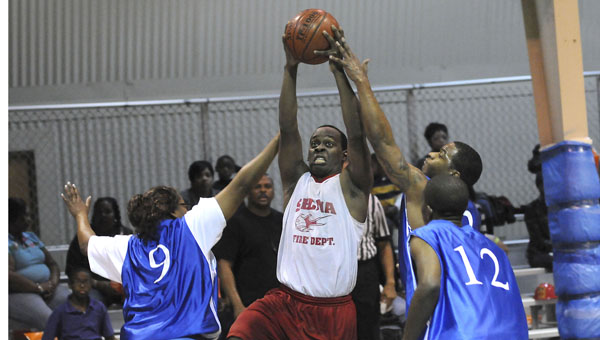 While the Selma Fire Department gained bragging rights in its 57-38 win over the Selma Police Department in basketball at Ellwood Christian Academy Wednesday, the game also marked the community coming together for a good cause.

The fire department defeated the police department in a game where all funds raised and toys gathered will go toward providing a merry Christmas for children around the city.

“All the donations and gifts will go toward Toys for Tots for Christmas,” said Sgt. Natasha Fowlkes with the Selma Police Department, who helped organize the game.

“We came up with an event to fund several kids for Christmas. Everyone likes to see the fire department and police department play ball, so that’s how it got put on.”

Concessions were sold and, along with admission at the door, toys were gathered to help provide to needy children.

The crowd in attendance was also provided entertainment in the form of play-by-play commentary, music, dance contests and the Selma Middle CHAT Academy cheerleaders.

Detective Dorothy Cowan with the Selma Police Department, who also serves as director of the Police Athletic League (PAL), organized the event and said the two departments like to get together and help provide for those in the area.

“We like to get together with the fire department and we had a game last year for our toy drive,” Cowan said. “We usually have a toy drive yearly, so we have a game to get donations for our toy drive. Those who brought a toy also got in.”

Capt. James Murphy with the Selma Fire Department, who played in the game, said events like these are always a good thing, and he wouldn’t mind seeing them more often.

“It feels good,” Murphy said. “We try to do this annually. For Thanksgiving we do a can drive where we gather food for the needy. Getting together and doing this feels real good. We can do this every month and it’d be fine with me.”

Chris Roper, who played for the police department, said, win or lose, charity games like this are great because they help children in need.

“It feels good to do something like this because it’s all for the kids, win or lose,” Roper said. “I love the kids, so anything to help them, I’m cool with it.”

John Nixon spots an opening and breaks for the basket during an intense battle with the Knights. The win puts... read more