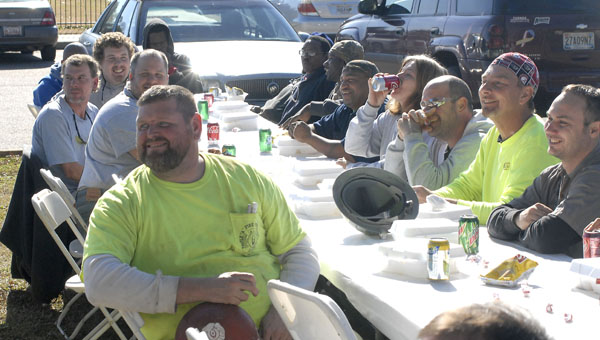 With the new Selma High School construction job inching closer and closer to completion, those in charge of the project showed their appreciation on Tuesday for the workers who’ve put the school together brick by brick, column by column.

Hoar Construction held a luncheon for the workers on the school building project to show its appreciation for the efforts of the workers of the various subcontractors who’ve contributed to the project.

Michael Sumners, the project superintendent with Hoar Construction, said the luncheon was just a way to show how thankful everyone is for the workers and the job they do.

“It’s just an appreciation luncheon for the guys on the job,” Sumners said. “Typically we like to do something toward the end of the job as certain subs (subcontractors) are leaving and others are coming on board. It just worked out good with Christmas near, so we’re just feeding everybody lunch today. We’re giving away gifts. We’ve got t-shirts, gift cards and stuff we’re giving out to show our appreciation.”

The workers were served barbecue plates and prizes were raffled off. After the raffle was over, the workers were also welcome to other gifts, such as t-shirts.

James Guy, who works with the subcontractor AAA Fire Protection, said the luncheon made the workers feel appreciated and makes them want to go out and continue the hard work.

“It’s good for morale,” Guy said. “It makes everybody want to go out there and continue to work hard.”

Walter Polnitz, who works with the subcontractor ACL Masonry, agreed that the luncheon made him feel appreciated.

“It was good,” Polnitz said. “They showed some appreciation for the hard work we do around here.