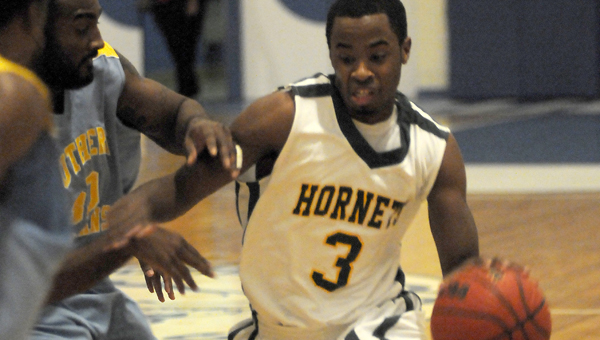 John Nixon spots an opening and breaks for the basket during an intense battle with the Knights. The win puts the Hornets at 5-9 on the season. -- Robert Hudson

The Concordia College Hornets trailed late, but they were able to force overtime and come out with a victory as they defeated the Southern University-New Orleans Knights 84-77 Tuesday at the Selma University gym.

Hornets’ head coach Anthony Rutledge said his team fought hard in the in the end to get the W.

“Much needed win for us,” Rutledge said. “We thank God once again for all things. The guys played hard tonight. They weren’t listening in the beginning, but at the end they started listening and we got back in the game with tough defense and inside play.”

The Hornets would have a chance to tie it up on their next possession, but the Knights would force a jump ball and the possession arrow would be in their favor.

The Knights would capitalize, as Travis Williams would score under the basket to make the score 73-69 with 0:16 left to play.

The Hornets would make it a one score game as Travis Roscoe scored down low to make it 73-71 game with eight seconds remaining.

The Hornets would steal the Knights’ inbound pass with John Nixon attempting the game tying basket in the lane, missing off the back of the rim, but Roscoe would tip it in to tie the game 73-73 with two seconds remaining.

The Knights would heave it down court with Williams catching it just behind the arch, but his game winning three point attempt would not fall, sending the game to overtime.

The Hornets would strike first in the extra period, as Zannie Pickens would score in the paint and go to the line for one more after being fouled, but he’d miss the free throw, putting the score at 75-73.

The Hornets would force a turnover and Roscoe would slam it in on the fast break to put the Hornets up 77-73 with 3:16 left.

But the Knights would answer right back, as Williams drained a three to make it 77-76.

After Nixon sunk a pair of free throws to put the Hornets up 79-76, the Knights would get a chance to shoot some charity shots of their own, but Clyde Moore would only hit one of two shots putting the score at 79-77 with 1:04 left.

The Knights would go to the line once more, but Anthony Jackson would miss both free throw attempts.

The Knights were forced to foul, sending Roscoe to the line with ten seconds left.

Roscoe would hit both free throws, sealing the victory for the Hornets.

Roscoe led Concordia with 25 points, while Pickens added 20 points and Nixon added 16 points for the Hornets.

Moore led the Knights with 24 points.

The Hornets will take the floor again at home on Wednesday, Dec. 16 when they play the University of New Orleans at 7 p.m.